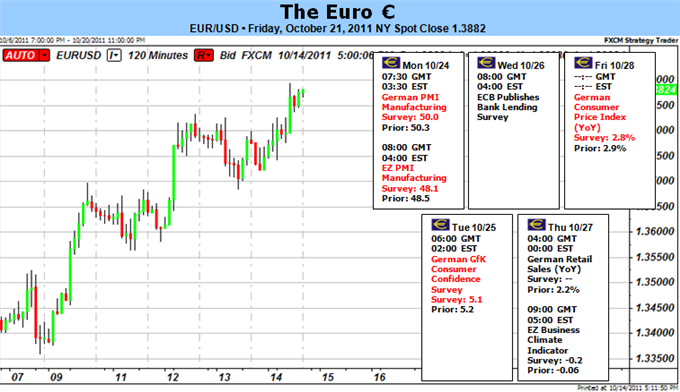 The Euro traded significantly higher ahead of what could be a make-or-break week for currencies and financial markets. European leaders, the International Monetary Fund, and members of the European Central Bank will meet over the weekend and on Wednesday to determine the fate of the debt-stricken Greek economy. All eyes turn to the so-called troika for resolution, and volatility is virtually guaranteed on major European event risk.

Fundamental analysis plainly favors Euro weakness and further fiscal turmoil is essentially guaranteed across the European Monetary Union. The numbers are sobering: economists predict that Greece will have total debt worth a massive 160+ percent of its Gross Domestic Product by year-end. In real terms this means that each percentage point paid in bond yields represents over 1.6 percent of the total economy. According to Bloomberg’s quotes, 10-year Greek bonds are currently trading at an almost-unbelievable 24 percent yields. If Greece were to finance their existing debt at this rate, the government would spend approximately 40 percent of GDP on interest rate payments alone.

Obviously Greece would never accept such usurious interest rates for funding, but this likewise implies that its government will depend on indefinite aid from Europe and the IMF. The previous wave of fresh fiscal aid was contingent on the fact that private creditors would forgive 21 percent of the Net Present Value of Greek debt. At the time this seemed enough to quell market fears of complete insolvency, but in real terms it would barely make a dent in Greece’s bloated sovereign debt.

One thing is guaranteed: the final solution will not be pretty. Representatives from the troika estimate that the Private Sector Involvement (PSI) will need to forgive 60 percent to bring Greece’s total debt to 110 percent of GDP by 2020. Yet such draconian haircuts would leave many European banks woefully undercapitalized and expose systemic risks to the financial system. Hence getting Greece’s balance sheet in order will require recapitalizations of the European banking system and likely much larger pledge of financial aid from European governments.

The truth is daunting and underlines the real difficulty surrounding a true solution to the fiscal crises. To make matters worse, the German parliament recently passed a bill to limit Chancellor Angela Merkel’s ability to pledge further fiscal aid to any European rescue. Even Europe’s paymaster (and arguably biggest winner in the current currency regime) is balking at fresh funding. The next steps will likely be further short-term measures to put out small fires. Yet the larger blaze will continue burning until markets are truly confident that European governments are solvent and can handle current debt loads.

The news has been consistently dire and the Euro previously traded significantly lower against the US Dollar. Yet recent CFTC Commitment of Traders data shows that speculators remained their most net-short EURUSD since the pair set a significant bottom at the $1.20 mark. Though it seems counterintuitive at first, such bearish fundamental sentiment may actually favor short-term EURUSD rallies.

In this author’s opinion, the EURUSD-short trade remains extremely crowded and there is clear risk that it could trade higher before its next leg lower. Perhaps we could see a short-term bounce if European leaders announce the next wave of Greek fiscal aid. Yet the overall trend plainly favors EUR losses, and we may take such a rally as an opportunity to go short EURUSD into the rest of the year. – DR