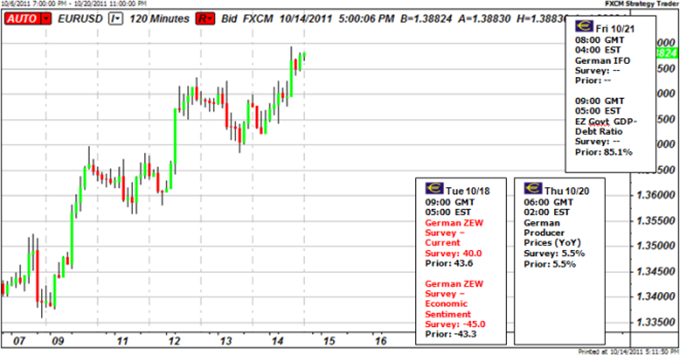 The Euro’s fundamental outlook is a mess. There is little doubt that the region is facing far greater losses on the ongoing expansion of its financial crisis; and the ultimate tab for this disaster (in both monetary and confidence means) is still unknown. However, having a rough idea of the pain someone may be in for often works as an anesthetic. Up until recently, there were contradictory positions amongst important policy officials on what options could be entertained and which were out of bounds; there was a loud call by a few key figures for allowing immediate failures; and too many voices were stating that were was a nearby cap on the amount of support that would be offered to the most troubled EU members and banks. Much of that has changed. Flexibility has opened up. And, though that naturally undermines the value of the currency, it removes some of the crisis pressure that severely depresses the market in the near-term.

In essence, what we have seen this past week – and what we could see in the week ahead – is a relief rally. Few traders are naïve enough to believe that the Euro-area’s troubles are now under control; but there is a growing theory that the near-term extreme on the crisis is within sight (and the market has made the effort to price in that worst case scenario). That said, as long as another wheel doesn’t fall off in the coming week and risk trends continue to advance (or remain static); the euro can recover more of the ground it has lost since the end of August.

Though a continued rebound is the path of least resistance, bulls will be navigating a field of fundamental landmines that will act as a constant threat to progress. The most immediate threat is the G20 meeting that is held through Saturday. A preliminary meeting of central bankers and Finance Ministers, they will no doubt dedicate much of their time to discussing to Greece and the broader European financial crisis. Meaningful progress here will be limited to what the broader group can accomplish (European policy makers do not take kindly to outside pressure). There have been suggestions that boosting IMF participation in the rescue process will be proposed; but the end game for Greece will likely discourage a consensus.

Further discussion surrounding the time frame for a Greece eventual default were expected to be pushed back for a couple months after inspectors that visited last month suggested the country be given its sixth tranche of aid (despite missing the agreed upon targets). Yet, perhaps the greater unknown is the recent is the warning by negotiators for the private sector holders of Greece debt that they would not accept a greater haircut than the 21 percent writedown agreed to with the second bailout agreement reached back in July. In contrast, it is rumored that the EU is seeking a 50 percent one-time write down while German banks are reportedly contemplating a 50-60 percent writeoff. Why is this so important? It translates into very real losses to the region’s banks, who are already in financial straight and possibly facing another EU stress test (which three-quarters could fail depending on how high the Tier 1 core capital ratio is set).

Another sovereign shock is certainly a threat to the euro (Spain was downgraded by Standard & Poor’s this past week and Italy the week before); but much of the policy we see being discussed is to stabilize the government level. That means the greater room for risk and mispricing comes through troubles spreading to the bank level. We have seen key measures of funding stress ease modestly; but they are far from stabile levels. A number of European banks have been downgraded this past week; and more are likely on their way. Should the market sense a major balance sheet hit or receding credit lines; it can stoke not just a European crisis – but a global one. – JK

To be added to John’s email distribution list, send an email with the subject line “Distribution List” to jkicklighter@dailyfx.com