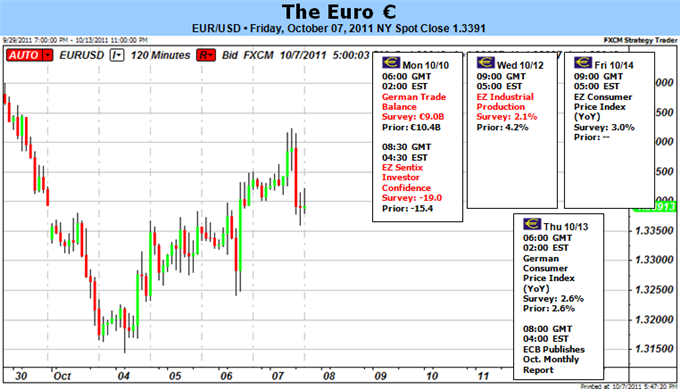 After spending the beginning part of the week much lower across the board, the Euro found a burst of life late on Tuesday. One of the best performing currencies headed into Friday, the Euro appeared to have regained some of its footing following last week’s late decline. However, following a European Central Bank meeting on Thursday with a dreary undertone, and a series of rating cuts by Moody’s Investor Services and Fitch Ratings between Wednesday and Friday, the Euro ended the week down 0.07 percent against the Greenback.

Although rates remained on hold at 1.50 percent, which if market participants were forecasting a cut should have boosted the Euro, it was President Trichet’s commentary that weighed on the region’s common currency during his final press conference. He noted that risks to economic growth remain on the “downside.” In the place of a rate cut at this meeting, the European Central Bank announced that it would resume its covered-bond purchases and reintroduce year-long loans for banks, as a way to free up liquidity. The decision has various catalysts. First, and primarily, no rate cut was made as it was President Trichet’s last meeting; the cut would have tarnished his legacy, a ‘mea culpa’ for raising rates earlier this year. Likewise, a rate cut might have been a white flag of sorts: acknowledging the strains on the market and the necessity for lower rates could scare investors.

Secondly, it’s clear the European Central Bank believes bond buying does in fact calm market jitters. Buying covered-bonds is essential for keeping sentiment stable, as the €2.5 trillion market for covered-bonds – assets back by mortgages or public-sector loans – is the foundation of Europe’s real estate lending. Another liquidity crisis onset by a Greek default would destroy the market, just as what happened when Lehman Brothers Holdings Inc. collapsed in September 2008.

While there are a smattering of events on the docket the coming week, perhaps the most important piece of data is the Euro-zone industrial production survey. Usually passed over by markets, industrial production is forecasted to have been cut in half, with the figure coming in at 2.1 percent versus 4.2 percent in the month prior. The poor reading will be a harbinger of the recession berating European shores. Nonetheless, data this week won’t drive market sentiment.

The key event for the Euro this coming week is the Greek repayment on Friday. There are two very clear outcomes: Greece makes its payment and meets its obligation; or Greece defaults on its debt. Essentially, any further funds that Greece receives will be restructured when the country defaults on its debts (which is inevitable at this point). The decision of whether or not this occurs could come as soon as this weekend. German Chancellor Angela Merkel and French President Nicolas Sarkozy are meeting, again, to further discuss ways to stem the debt crisis and prevent contagion from spreading to other bond markets, such as Italy and Spain. If no agreement is reached over the weekend, markets will become increasingly volatile headed into Friday. While Greece missing their obligation is unlikely – Euro-zone leaders appear poised to fight a default further – if such an event were to occur, the Euro would come under immense pressure and could easily slip below 1.3000 against the U.S. Dollar in a matter of hours. – CV