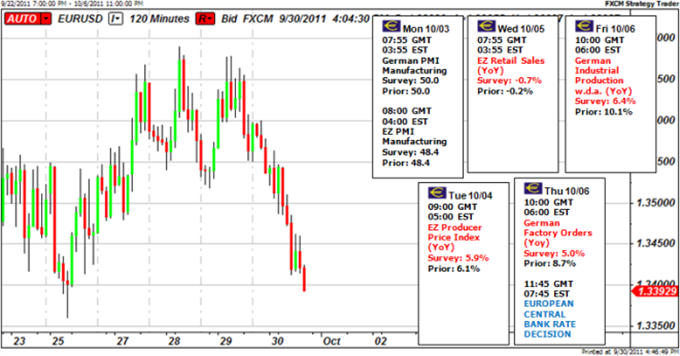 In an unexpected burst of momentum in the final hours of trading this past Friday, the euro tumbled to the threshold of major support against its US and British counterparts (two of the currency market’s most liquid pairs). This puts the world’s second most liquid currency at immediate risk of a extraordinary plunge to start the new trading week. However, whether or not we have immediate follow through is largely dependent upon whether this was a natural reflection of the deteriorating fundamental conditions behind the struggling euro or if, on the other hand, this was a unique situation that is reflective of quarter-end positioning.

It is an unusual situation where the end of the week, month and quarter align. It is even rarer that this particular event occurs during a period when the financial markets are arguably on the verge of a second round financial crisis. End-of-quarter position squaring is not an unusual phenomenon; but we have not seen it have so significant an impact on the euro in recent history. That begs the question: was the currency’s sharp drop a one-off repatriation; or was it a lasting shift in sentiment running under the guise of maintenance capital flows? Depending on the answer to that question; the euro can take dramatically different paths next week.

If the late tumble was indeed the influence of a temporary, receding capital tide; it is very likely that the floor underneath EURUSD and EURGBP holds up to start the week and further encourages a meaningful recover later into the week as we approach event risk. On the other hand, if confidence in the euro was collapsing under the weight of its own fundamental future; we could come to the rare instance where a major generates a new trend in the thinnest session (the opening Asian session) and/or before heavy event risk.

Where Monday will be a litmus test for the volatility to start the week, we already know the stability beneath the euro. Conditions are extremely strained; and the probability that a smoldering fire could turn into an outright financial blaze is frighteningly high. There are two particular threats that we will need to keep tabs on next week: the progress on the regional crisis and the possible outcomes for Thursday’s ECB rate decisions. It is easier to benchmark the policy meeting as there is a specific time involved. However, this is far from the typical meeting. The market is reflecting a near-certainty that the President Trichet will usher in a 25 basis point cut before his term ends. That said, a reflection on commentary and data suggests the policy group is more likely to revive covered bond purchases (European QE). If we see both, it would be that much bearish. Alternatively, if we only see one of the two and not significant enough conviction behind further policy accommodation, the bears may find they have overshot with their expectations.

Less easily defined; but far more important to the future of the euro is the progress behind the region’s long-lived financial crisis. Through this past week, we have seen yields on Greek, Italian and French sovereign debt ease while credit default swaps on domestic banks and EU members themselves have also backed off. Is this evidence of an impending recovery? No. Instead, we are seeing a natural balance that is common with uncertainty about the future – but this equilibrium is still deep into panic territory. Anything can trigger another rise in fear – a headline, a disappointing bond auction (we have Portugal and Spain selling debt this week), a breakdown in negotiations about how to handle Greece and many other issues.

With all this risk in mind, we should also be aware that there is room for relief. Given the extreme levels of pain and fear across so many European barometers; if there is a sign of temporary reprieve, it could shake speculative shorts and encourage temporary inflow. ECB stimulus could accomplish that; and so too can hope surrounding the EFSF expansion ‘buy time’. – JK