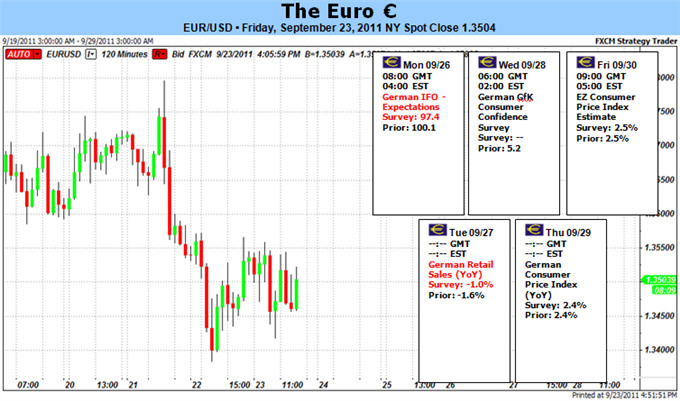 The Euro, in what has turned into a gauge of confidence over the past several weeks, took the collateral damage amid the capital flight from the currency bloc. Although the Euro was the second best performer on the week against the U.S. Dollar – only the Japanese Yen performed better – the single currency still lost 2.14 percent to its American counterpart, a significant leg down. Now, after the third week out of four times losing ground against the Dollar, the Euro is over 1000-pips lower than its monthly high at 1.4549, at 1.3504.

In terms of the European sovereign debt crisis, there are few inspiring developments. Regardless of what policymakers have said, it is of our firm belief that the situation in Europe will only worsen. Failure to enact any significant plan has certainly weighed on investor confidence, and market participants are taking less stock in mere words than they were months ago; promises to solve the problem without actually solving any issues has become the unfortunate norm.

For those seeking some refuge from the European sovereign debt crisis, there was little sign of relief. With a Greek default inching towards the edge, markets continued their liquidation of assets and absolutely decimated European equity markets. The biggest losers, the French stock exchange and the German stock exchange, lost 7.29 and 6.76 percent each, respectively, as market participants jettisoned financial shares on fears of contagion. While a brief rebound could occur, perhaps through the majority of the week, the long-term fundamentals have not shifted nor have policymakers set about any path to ensure financial stability.

While this is forecasted to be the major trend guiding the Euro over the next week, and for some time thereafter, there are a few data releases that could either accelerate the Euro’s depreciation or give reason for a small rebound against the safe haven currencies. In regards to the broader Euro-zone, Euro-zone confidence readings, for consumers, broad economic sentiment, the industrial sector and the services sector will be released. An individual breakdown, at this point in time, is not necessary: all are expected to erode further, according to a Bloomberg News survey.

Typically, if there are market moving data from the Euro-zone, aside from the European Central Bank rate decision, it comes from Germany. On Thursday, German inflation data is due for the past month, with the rate expected to hold at 2.4 percent on a yearly-basis. The recent period of relatively higher interest rates set forth by the European Central Bank has certainly alleviated price pressures in Germany. Also on Thursday is a key German vote for the European Financial Stability Facility. Today, the German parliament’s finance panel backed changes to the Euro rescue fund, setting up a full lower-house vote on September 29. While this vote is expected to pass, this remains the key event for the week for Europe, because if it does not, the Euro-zone in its current format will be very much in jeopardy. –CV