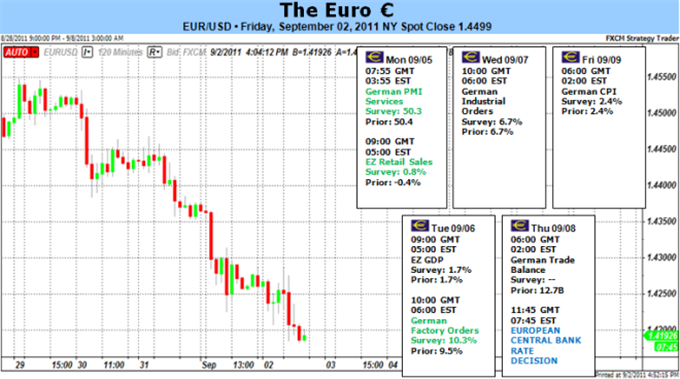 Euro Crisis Back in Focus as Greece Troubles, ECB Decision Ahead

Euro Crisis Back in Focus as Greece Troubles, ECB Decision Ahead

Fundamental conditions for the euro have not significantly improved over the past months, policy and monetary officials have simply been able to buy time. In this lull, traders have found an uneasy normalcy that acclimated them to the troubles facing certain EU members (Greece, Portugal, Ireland and now others) as well as the region’s banking system while encouraging the masses to take advantage of the temporary reprieve by focusing on the region’s relatively high rates. However, this peace lasts only so long as the financial deterioration doesn’t escalate. With that said, this past week we have seen conditions visibly deteriorate. And, given the troubles that we are carrying forward, the euro looks as if it will face a serious capital flight in the very near future.

If you are looking for catalysts to spark fear amongst speculators and investors in the Euro region, you don’t have to look very far. Perhaps the most pervasive and familiar threat to the market is Greece’s slow-motion meltdown. Despite the incredible effort fronted by the European Union, ECB and IMF; the country simply cannot come out of this debacle whole. To end this past week, the two-year Greek government bond yield jumped to an astounding record high of 47.2 percent. That along with the astronomical level of the country’s sovereign credit default swaps suggests that the market is as sure that a default is impending as you can get. The only reason this has not already happened is because of the significant capital invested into the nation’s rescue thus far and the ISDA’s (the group that determines default criteria) recognition that greater losses to its members would occur if they called the technical default.

How long can Europe string the Greece situation along? They have done well so far; but the situation is growing to the point where they simply cannot afford to simply fund their austerity efforts. The cues of serious decision to helping this EU member have already been signaled. Despite the agreement to a second 109 billion euro bailout for the country back in July; we find Finland standing in direct opposition to an open-ended rescue without some form of collateral. The problem with offering collateral to Finland (which was initially arranged but later rebuffed by other regional leaders) is that others will demand the same treatment. This is an impasse as Finland has said it will not support the second bailout if it cannot have greater assurances that its capital will be returned. Last week, a rumor circulated that Greece had sought out a US law firm to explore a debt restructuring an exit from the Euro Zone. It comes as no surprise that this report was rejected by officials; but we shouldn’t be surprised if it catches traction going forward and proves to ultimately be true.

The real troubles for the euro lie beyond Greece. Given the market levels we are currently facing, it is clear the market has priced in the worst for the troubled Mediterranean country (though it is still unclear what this fallout will mean for the monetary union). On the sovereign side, we have skipped Ireland and Portugal and are watching Italy and Spain whose debt has had to find significant support from the ECB (in the form of active buying) to prevent the inevitable push to a bailout. Showing just how serious the problems are though is the reemergence of a financial strain in the global financial system. Given the region’s exposure to Greek and other problem investments, this worldwide problem is severely amplified in Europe. A good benchmark for the region’s banking system is Societe Generale.

With all the serious background and ambiguous troubles the euro faces going forward, we shouldn’t hold the ECB decision due on Thursday in too high esteem. A benchmark rate of 1.50 percent (or even 25 or 50 basis points higher) simply cannot compensate for the euro’s troubles. In fact, there is a good probability that ECB President Trichet signals a more accommodative approach at this week’s decision and press conference. – JK