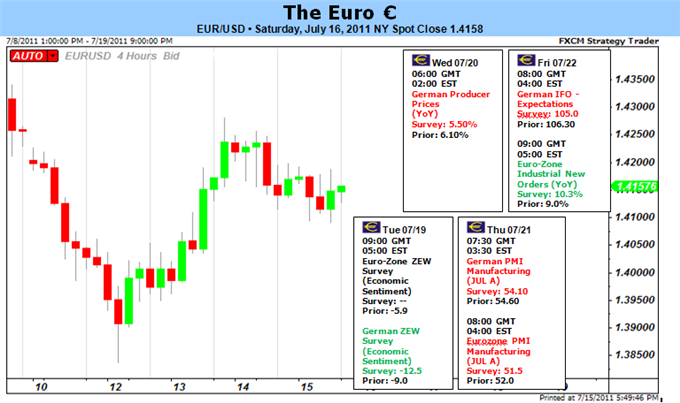 European policy officials, over the past year, have taken the approach to impending financial disaster by putting out small fires only when conditions seem to be borderline crisis. This method was working for the euro initially as interest rate speculation kept translated into higher rates and a definable period of expected stability. However, market participants are clearly growing weary of this ‘kick the can down the road’ approach – especially as the rate forecast has eased back and exposed the threatening balance between risk and reward. Heading into the new trading week, we will have to monitor the same themes that have dominated for the past few months; because should global financial conditions flag, it will expose the crumbling situation in the Euro Zone.

In the past few weeks, we have seen the dominate European concerns grow rather than recede despite the efforts that have been put forward by officials. Through the coming week, the trouble related to sovereign ratings downgrades will continue to dominate the financial headlines; but their influence will likely taper off. This does not mean that developments won’t generate price action; rather, new information on this front will likely have to work in coordination with another (more imposing) development. Having seen the Portuguese, Irish and Greek sovereign credit ratings downgraded these past two weeks (all three now junk status) and a diminishing impact from each announcement, it is clear that the market has grown desensitized to further changes.

For sovereign ratings, traders find temporary solace in the adjustments that the ECB has made to collateral criteria (so that each country can still use its debt to tap funds from the central bank) and the focus of bailout discussions for these countries. Holding a greater sway over the shared currency this week, we will see greater fallout from the EU stress test results. This second review of the 90 important banks from the region encouraged groans when it was reported that only 8 banks (5 Spanish, 2 Greek and 1 Austrian) for a total need of 2.5 billion euros. After the first stress test left 7 banks with a failing grade and tab to raise 3.5 billion euros – only to be followed by bank rescues and the bailout of Ireland and Portugal – a sense of skepticism set in. The fact that the testing period concluded before recent swells in bond yields, the number of banks that fell within the 5 and 6 percent Tier one category would tack on another 16 banks suggests, and a Greece default was once again ignored in the adverse scenario exposes clear gaps in this reports soundness.

Now that the market has absorbed the threat assessment (without a meaningful impact on the markets), market participants, journalists and economists will go to work to point out inconsistencies and burgeoning problems. If risk appetite for the broader market is under pressure; growing cynicism over the Euro Zone’s health will paint a target on the currency. The more important consideration for the regions financial health is liquidity. Should concern for the fallout for further sovereign downgrades, a default from Greece or credit problems for a particular important regional bank translate into a liquidity crisis; the euro will come under serious pressure.

The wave of uncertainty and troubled scenarios the euro faces, however, does not guarantee selling pressure. As noted above, general market sentiment can play a considerable role as appetite for yield can temporarily overwhelm fears of a more distant financial reckoning. Another consideration is the health of the dollar. The FX market can very well price currencies by establishing the ‘best of the worst’. If the threat of a US sovereign downgrade or acceptance of QE3 catches traction, the euro will suddenly fill the role of liquid alternative. – JK