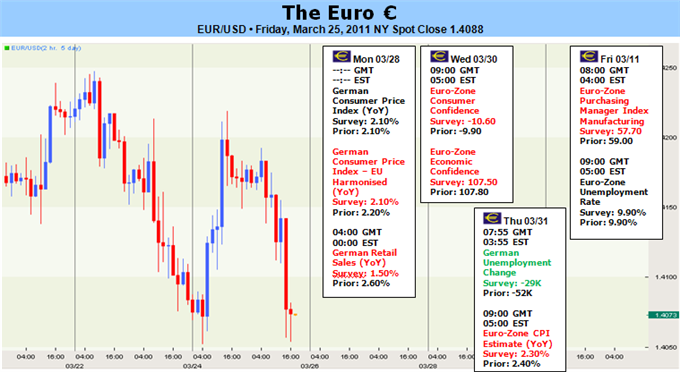 - EURUSD has once again stalled at November’s swing high. Will there be a break or reversal?

Euro-region fundamentals deteriorated significantly this past week; and yet the euro has given up relatively little ground against its primary counterparts – the US dollar, British pound, Japanese yen and Swiss franc. Is this a sign that the currency is impervious to such fundamental developments? Are interest rate expectations that intoxicating that they can counterbalance such a significant corrosion of the EU’s financial stability? There is certainly some level of truth in both of these considerations; but the burden to maintain the euro’s bullish bearings has grown exponentially. All we need is a meaningful catalyst to turn uncertainty into genuine fear; and the currency’s advance can quickly turn into a reversal.

To really garner a feeling for euro fundamentals going forward; we need to understand the change in the tide this past week. Collecting the most headlines was the dramatic descent for Portugal. Starting with a downgrade in growth and warnings of a government collapse, Parliament went on to vote down additional budget cuts (which many believe are essential to avoiding a bailout), Prime Minister Socrates resigned, the country was downgraded by two credit rating agencies and the EU summit essentially glossed over the new trouble facing their member. Outside this small nation’s troubles, we were further met with news that Ireland’s economy shrank 1.6 percent in the fourth quarter, its yields surpassed 10 percent, and 30 Spanish banks were downgraded.

However, for these pre-Summit developments, euro bulls could have reasonably fallen back on expectations that the EU would push through proposals that would offer further relief and high interest rate expectations could keep the market distracted as well. Well, help from policymakers didn’t come through. Not only did they simply label Portugal’s situation stable; Ireland found itself at an impasse on its emergency lending rate, Germany demanded a lower initial bill for the EMS, the EFSF funding effort was largely ignored and there was no follow discussion on a government bond purchasing program. All told, these developments don’t in themselves degrade the region’s health; but they do expose it to unfavorable fluctuations in the market confidence.

This leaves the euro exposed to market fluctuations – just as most of its liquid counterparts are. That means, a drop in broader investor sentiment that takes equities, commodities and yields lower could cut into the shared currency’s strength. Interest rate expectations are the euro’s primary strength. And, while the ECB seems committed to a near-term hike; that does not mean there will be a series of hikes to keep the market entranced – expectations of widening differentials is a bigger catalyst under most circumstances than just maintaining a high rate. This is a similar concern that is playing out for the British pound.

Furthermore, there are particular catalysts to threaten the euro from the inside. Many policy officials are scheduled to speak next week; which is always an opportunity to stoke fear or optimism. If we are looking for a particular event to be concerned with; the Bank of Ireland’s stress test is particularly worrisome. A Bloomberg survey showed analysts and economists suspect the financial system needs an additional 27.5 billion euros; but how realistic the groups ‘severe’ scenario proves to be may stoke doubt in policy officials’ efforts and judgement. And, if skeptics believe Ireland and Portugal are simply not big enough threats to the system, perhaps there will be an update on the pricing of Spanish lenders assets to pre-crisis highs; and the substantial losses this system faces (the nation’s largest property site puts these housing losses at 80 to 100 billion euros) will indicate just how difficult the future is for the euro area. – JK