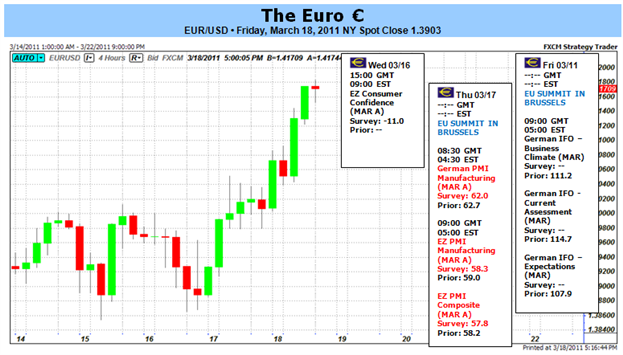 The euro defied expectations and set fresh highs against the downtrodden US Dollar, fueled by a late recovery in financial market risk sentiment and expansion in emergency measures to contain regional sovereign debt crises. Early signs pointed to a potentially significant pullback in the US S&P 500 and the highly-correlated European currency. Yet by the end of the week, key developments had eliminated a good deal of uncertainty surrounding Europe and broader financial markets. A potentially busy week for European fundamentals and lingering geopolitical risks nonetheless threatens considerable volatility in the days ahead, and it will be critical to watch whether the single currency can continue its torrid uptrend against the US Dollar.

A European Union summit dominates foreseeable event risk in the week ahead, and markets will want to see further details on how recently-announced measures will stave off further sovereign debt crises in the single currency area. Officials announced an expansion to the European Financial Stability Fund (EFSF) and a creation of a permanent fund of the same size, but recent downgrades to Portugal’s sovereign debt rating emphasize that confident is still lacking in fiscal stability. Thus markets will look to the European Union summit to assuage fears. Given recent euro gains, one gets the sense that anything short of full clarity and

This heightened optimism, however, was fully offset this past week. As the week wore on, Greece received a three-notch downgrade, Spain suffered its own sovereign rating cut, Portugal was forced to pay exceptionally high rates at a debt auction and ratings agencies reported that the recapitalizing costs for Spain’s banking sector would be at least two-to-three times greater than the Bank of Spain’s 15.2 billion euro assessment. Whether or not these fundamental concerns can offset the yield forecast and dampen risk appetite remains to be seen; but the market will have a lot to consider come Monday.

After liquidity fully drained this past Friday, EU officials finally emerged from their special summit in Brussels and announced the progress made through the session. Little was expected from this gathering as it was a precursor to the official meeting over March 24th and 25th. However, the updates provided carried more significant than many would have expected. Despite Germany’s adamant position against expanding its rescues liabilities, it was agreed that the EFSF would be able to buy bonds directly in the primary market and Greece would be offered a conditional 100 basis point reduction to its emergency lending rates as well as an extension to its loans out to 7.5 years. On the other hand, officials merely voiced confidence in Portugal’s financial efforts (despite record bond yields) and noted that Ireland was not offered the same reduction in rates on emergency loans.

Where the euro goes from here is fully dependent on how confident in these commitments the market is. Lower rates for Greece are likely dependent on asset sales (a supposed prerequisite German Chancellor Merkel raised in a parliamentary meeting). What’s more, helping one EU member while neglecting Portugal and Ireland could lead the collective to failure just as surely as if they committed extra support to no one. If global market participants remain skeptical following last week’s downgrades and the realization that there is still an extraordinary demand for liquidity amongst the banks; the euro will falter. And, through it all, if the global markets are unwinding in a risk aversion bid; the euro will tumble regardless of its own internal, fundamental debates. -DR