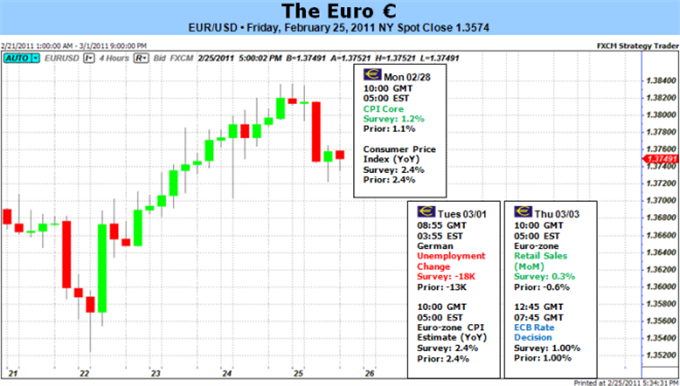 - Euro climbs as ECB rate expectations outpace all its counterparts

The euro is in an exceptionally interesting situation. Over the coming month, we are jumping from one major fundamental event to another week after week. And, these particular affairs are far more influential than just a mere economic indicator – they play to the very core of the currency’s fundamental appeal. Over the past few months, the euro has marked a notable departure from the financial concerns that plagued the region’s outlook on and off since the Greek bailout catalyzed fears that the monetary union itself was at risk. Yet, just in the past week, we have actually seen the neutral shift turn bullish with interest rate expectations leveraging the potential for capital and yield returns from this shared currency to a level that is well beyond many of its peers.

Heading into the new trading week, we know that the preoccupation with rate expectations is so extensive that it has overridden a tentative but meaningful risk aversion move. With the market pricing in 95 basis points (bps) of hikes over the coming 12 months, the bar has been set high. This projection is at a considerable premium to even the Bank of England forecast which is colored by inflation that is currently at 4.0 percent. With that in mind, there will be greater interest in Thursday’s ECB rate decision than we have growth accustomed to considering the policy authority has held its hand on changing rates for nearly two years now. There seems little doubt that the central bank will hold rates steady for yet another meeting; but all of the recent hawkish speculation will require some level of confirmation to maintain the currency’s bullish bearings. A boost to growth or inflation expectations, rhetoric that suggests a withdrawal of atypical stimulus measures or even a subtle change in key terminology could reaffirm bulls’ convictions. On the other hand, a failure to support the speculative crowd could pull the rug out from under the euro.

Supporting interest rate expectations is particularly important for the euro’s performance; because without the promise of higher returns down the line, the market will once again have to price in the uncertainties related to the region’s financial troubles. Fear of another financial crisis overtaking another EU member has cooled considerably these past weeks thanks largely to officials’ open-ended vows to expand their support of the region’s laggards. However, this merely bought policymakers time. Eventually, they will have to deliver on this promise of stability. With the summit that is supposed to hold the vote on proposals like increasing the size of the bailout program, lowering the rate charged to those that need to tap the emergency funds and allowing bond buyback only a few weeks beyond the ECB rate decision; we could be making a sharp transition from the reward side of the trading equation to the risk side. And, with the German parliament looking to vote on a hard line to prevent further concessions to the bailout regime a week before the EU summit; the picture isn’t as rosy as the markets seem to be accounting for.

Considering the main fundamental catalyst for the coming week is due Thursday; we have downtime before the next big decision is made. In the meantime, the market will have enough fodder on hand to stir volatility and perhaps offer final adjustment to rate forecasts. The German unemployment change figures will steer the economic side of policy expectations. More pertinent though will be the Euro-Zone CPI estimate due Tuesday. Forecasts for an unchanged 2.4 percent annual clip of growth will keep the hawkish outlook in place without further accelerating rate watchers’ time frames. Alternatively, a meaningful deviation could pitch the euro into a meaningful drive. - JK