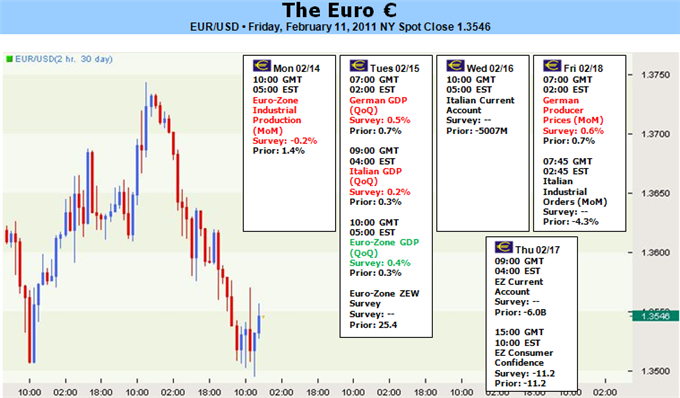 - Spain reports growth of 0.2 percent in the fourth quarter thanks to exports

The euro will once again be the master of its own future this week. Where the shared currency can often find greater influence through cross-market fundamental winds; the European docket actually holds some of the most potent event risk while the speculation behind the region’s health posses one of the greatest threats to global financial stability throughout the market. There is always a balance between positive and negative risks for a currency or asset that eventually tip to feed a concerted drive. However, we should also remember that there oftentimes, there is far greater potential for a shift in a particular direction given the backdrop of expectations and fundamental health. This is certainly the case for the euro where recent strength has been leveraged through hope that the region could find its way out of a complicated and pervasive financial problem.

If we were to paint a positive and negative fundamental scenario for the euro going forward; which would generate the greater momentum for the currency? Through January, the currency drove a rally on the belief that European officials were making a concerted and coordinated effort to snuff out financial instability in the region by discussing proposals aimed at deepening the bailout effort. Since this currency has already moved on speculation of a positive outcome and policymakers agreed to put off conclusions (more like aggressive compromising) until March, the outcome of a strong positive reaction is limited. Alternatively, should this relief rally prove groundless and traders be reminded of just how complicate the region’s financial problems are; the unwinding of speculative premium could be aggressive. What would shake the market’s nerves if we aren’t to see a definitive answer on the bailout effort until March? This is where the economic calendar comes into play.

Major event risk in itself, the preliminary 4Q GDP readings for regional member economies will also give insight into the effects of austerity measures as well as the true extent of problems relating to the EU’s shared monetary policy effort without a complementary fiscal consistency. This past week, the Spanish growth readings set a relatively optimistic tone. The 0.2 percent growth through the final quarter of the year suggests the economy considered to be the lynchpin in the EU’s eventually finding stability or perhaps failing can hold its own. That said, it has been suggested that this particular performance was heavily influenced by exports – not a reliable contributor. Going forward, the German and Euro-Zone figures are the more publicized readings; but to establish a true sense of health for the euro, we will need to gauge the health of the under performers: Portugal and Greece. Both are expected to have contracted through the period – acting as a prominent anchor on the region. The deeper the EU’s weakest links fall into the economic hole, the more concerned investors will be that the economies will default, be removed from the euro or feed a dependence on stimulus. - JK