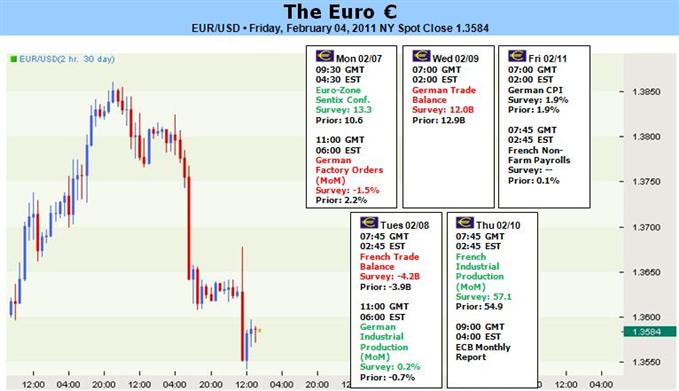 Euro Stages Major Turnaround – is this the Reversal?

Euro Stages Major Turnaround – is this the Reversal?

- Euro at risk of an important reversal amidst price/sentiment divergence

The Euro saw a potentially significant reversal against the US Dollar through late-week trade, threatening a larger correction as it failed to hold highs and finished lower through Friday’s close. Markets initially sent the downtrodden US Dollar sharply lower against the Euro and other major currencies through Monday’s open, but a later reversal suggests short-term momentum may have turned in the Greenback’s favor. Of note, the Euro/US Dollar set a potentially significant “Evening Star” reversal formation as it failed to hold fresh multi-month highs on two consecutive trading days and closed sharply lower on the third. A surprisingly dovish European Central Bank interest rate decision may have been the catalyst to force a larger move lower in the previously high-flying EURUSD.

Euro volatility expectations have dropped considerably as a highly-anticipated ECB rate decision and US Nonfarm Payrolls result have come and gone, but that hardly guarantees slower price moves in the days ahead. If this is indeed a potential reversal point, price action will almost certainly be choppy and sharp intraday swings are likely. Foreseeable European economic event risk is nonetheless limited to mostly second-tier economic releases. A potential exception comes on an often-unpredictable ECB Monthly Report due Thursday morning at 09:00 GMT. Given the euro’s sharp reactions to recent ECB rhetoric, any surprises could force important EURUSD swings

European Central Bank Governor Jean Claude Trichet surprised markets as he expressed a relatively dovish tone on inflation through Thursday’s announcement. The euro had previously rallied on expectations that the ECB may soon move to raise interest rates on growing price pressures within the EMU. Yet Trichet all but quashed such speculation as he underlined the relatively benign trend in core price inflation. Overnight Index Swaps now predict that the central bank may move rates through the second half of the year at the earliest, and the euro has fallen in kind.

The top question on traders’ minds is clear: is this the start of a larger Euro/US Dollar correction? Our technical strategists certainly think that this may be the spark necessary to force a major EURUSD turnaround. The fundamental picture remains less clear, but a relatively positive result in US Nonfarm Payrolls data suggests the US recovery may be picking up steam. The headline NFP change missed consensus forecasts by a wide margin. Yet inclement weather across the country meant the survey likely understated job growth to a similarly large extent. It will be critical to see how the EURUSD starts the week’s trade, as this may set the tone for following days and subsequent weeks through February. - DR