Anti-fiat gold pricesGold aimed lower this past week, trimming some downside progress on Friday. A mixed US non-farm payrolls report sent Treasury yields and the US Dollar lower, offering XAU/USD upside momentum. While average hourly earning beat expectations, the headline jobs gain clocked in at 559k, lower than the 650k consensus. While the unemployment rate declined, so did the labor force participation rate.

The top-tier event risk for gold next week is arguably Thursday’s US CPI report. One month ago, headline consumer price growth increased 4.2% year-over-year (YoY). That was the fastest pace since September 2008 and rekindled bets of sooner-than-anticipated Fed monetary policy tapering. But, persistently dovish commentary from the central bank swiftly cooled those expectations.

The core inflation rate, which strips out volatile food and energy prices, is anticipated to clock in at 3.4% y/y in May. On the chart below, that would be the most since early 1993, or just about 30 years ago. An unexpected beat in the data could revive Fed tapering bets, pushing up bond yields, the US Dollar and bringing down anti-fiat gold prices.

But, the extent of follow-through may have to wait until the next Fed interest rate decision later this month. Some members, such as Patrick Harker, have begun alluding to talking about when to unwind lose policy. The central bank’s position, for now, is that recent inflation is transitory, being impacted by a low base effect from a year ago.

As such, it could be possible that anticipation ahead of the central bank leaves gold in a consolidative state. Traders may await how the Fed could change its tone amid last week’s NFPs and the upcoming CPI report. On Friday, University of Michigan sentiment is expected to cross the wires at 84.0, up from 82.9 prior. Check out the DailyFX Economic Calendar for key updates related to the yellow metal.

US Core Inflation Since 1993 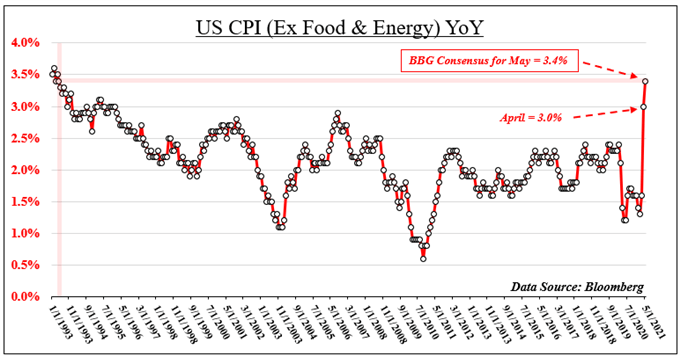