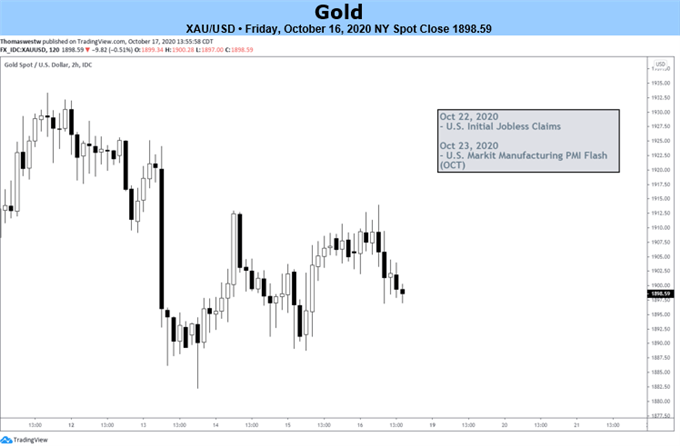 The price of gold pulls back from the monthly high ($1933) as the US Dollar appreciates against most of its major counterparts, and the precious metal may continue to exhibit an inverse relationship with the Greenback as the Federal Reserve vows to “increase its holdings of Treasury securities and agency MBS (mortgage-backed securities) at least at the current pace.”

The price of gold appears to be stuck in the September range as US lawmaker struggle to pass another round of fiscal stimulus, and the deadlock in Congress may continue to drag on risk appetite as it heightens the risk for a protracted recovery.

Investor confidence may continue to abate as the Federal Open Market Committee (FOMC) appears to be on track to retain a wait-and-see approach at the next interest rate decision on November 5, and it seems as though Chairman Jerome Powell and Co. will rely on its current tools to support the US economy as most Fed officials judged that “yield caps and targets would likely provide only modest benefits in the current environment.”

In turn, the Fed may continue to adjust its non-standard measures as Cleveland Fed President Loretta Mester, a 2020 voting-member on the FOMC, insists that the committee could “shift to longer-term Treasuries, as we did during the Great Recession,” and the dovish forward guidance may heighten the appeal of gold as an alternative to fiat currencies as the Fed’s balance sheet increases for the second week.

The most recent update showed the Fed’s balance sheet widening to $7.151 trillion from $7.0.75 trillion in the week of October 7, and the Fed’s dovish forward guidance may keep the price of gold afloat as Chairman Powell and Co. remain “committed to using the Federal Reserve's full range of tools in order to support the U.S. economy.”

Looking ahead, New York Fed President John Williams and Governor Randal Quarles may strike a similar tone as the both of the permanent voting members on the FOMC are scheduled to speak over the coming days, and a slew of dovish comments may keep current market trends in place as the central bank plans to unveil a “more explicit outcome-based forward guidance.”

With that said, the price of gold may continue to exhibit an inverse relationship with the US Dollar as the Fed’s balance sheet approaches the peak from June, and dovish remarks from FOMC officials may keep the precious metal afloat as it helps to restore investor confidence.