As mentioned in previous reports, Donald Trump’s unexpected decision to pull the plug on fiscal stimulus negotiations could undermine gold prices in the near-term, as the President tweeted “I have instructed my representatives to stop negotiating until after the election when, immediately after I win, we will pass a major Stimulus Bill that focuses on hardworking Americans and Small Business”.

Of course, President Trump has softened his stance in recent days, allowing talks between Treasury Secretary Steven Mnuchin and House Speaker Nancy Pelosi to continue, albeit the probability of additional fiscal aid this side of the US Presidential Elections on November 3 seems relatively slim.

Speaker Pelosi remains vehemently opposed to approving singular aid packages stating, “there is no stand-alone bill without a bigger bill” while Senate Majority Leader Mitch McConnell believes that “the speaker insists on an outrageous amount of money”.

This breakdown in negotiations may concern Chairman Jerome Powell and the Federal Reserve given the minutes from the Federal Open Market Committee’s (FOMC) monetary policy meeting in September showed that the central bank believes that the absence of “an additional pandemic-related fiscal package” could see growth “decelerate at a faster-than-expected pace in the fourth quarter”. 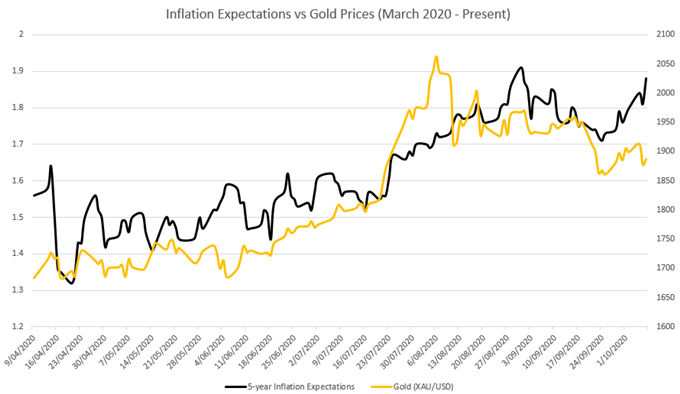 However, gold prices seem somewhat unfazed by these developments, which suggests that the market may be discounting the incumbent President’s remarks given Mr Trump trails his Democratic challenger Joe Biden in the polls by the widest margin since late June and holds double the deficit he had against Hillary Clinton at the same point in 2016.

In fact, recent price action could be indicative of a market pricing in a Biden presidency, which is expected to bring with it substantial fiscal stimulus if the Senate flips to a Democratic majority.

The notable turn higher in inflation expectations appears to coincide with the former Vice President’s surge in the polls and could be behind gold’s resilience in the face of fading fiscal stimulus hopes.

Therefore, although the absence of additional fiscal aid may weigh on the price of Bullion in the near-term, the growing likelihood of a Biden win in November could see market participants begin to price in a more extensive government support package and in turn put a premium on the liquidity-driven precious metal. 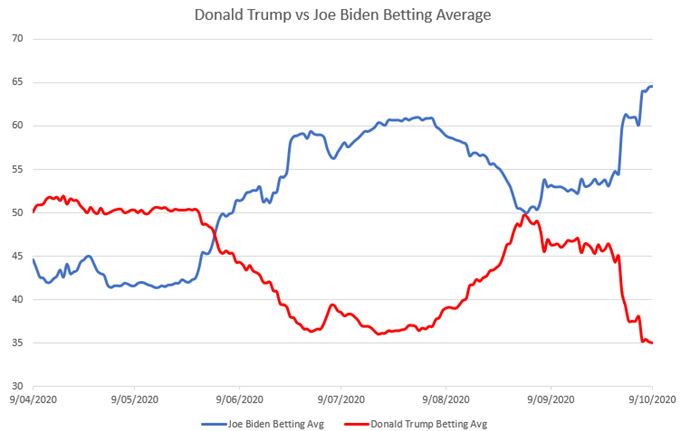