The price of gold consolidates after trading to a fresh record high ($2075) in August, but the macroeconomic environment may keep the precious metal afloat as the Federal Reserve appears to be on track to retain the current policy at the next interest rate decision on September 16.

The price of gold struggles to retain the rebound from the monthly low ($1863) as the Federal Open Market Committee (FOMC) Minutes reveal a looming change in the monetary policy outlook, with Federal Reserve officials discussing an outcome-based approach versus a calendar-based forward guidance as “a number of participants noted that providing greater clarity regarding the likely path of the target range for the federal funds rate would be appropriate at some point.”

However, the FOMC appears to be in no rush to scale back its emergency measures as the committee votes unanimously to push back “the expiration of the temporary U.S. Dollar liquidity swap lines through March 31, 2021” after extending its lending facilities through the rest of the year. As a result, upcoming US data prints may do little to alter the path for monetary policy as the FOMC vows to “increase its holdings of Treasury securities and agency residential and commercial mortgage-backed securities at least at the current pace.”

Looking ahead, it remains to be seen if Chairman Jerome Powell and Co. will reveal anything new at the Kansas City Fed’s Economic Symposium in Jackson Hole, Wyoming scheduled for August 27-28 as “members agreed that the Federal Reserve was committed to using its full range of tools to support the U.S. economy in this challenging time.” In turn, the Fed symposium may indicate more of the same for the September meeting, and current market conditions may keep the price of gold afloat as the crowding behavior in the Greenback looks poised to persist over the remainder of the month. 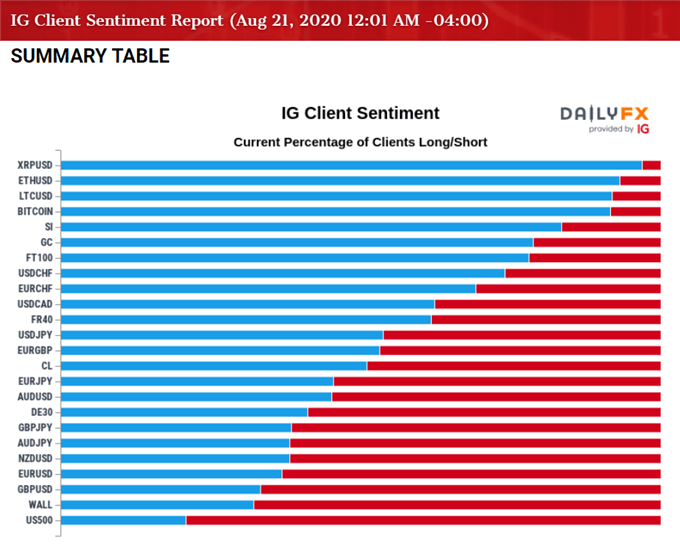 The IG Client Sentiment report continues to reflect the net-long US Dollar bias carried over from earlier this year as the latest update shows retail traders still net-long USD/CHF, USD/CAD and USD/JPY, while the crowd remains net-short AUD/USD, NZD/USD, GBP/USD and EUR/USD.

The net-long US Dollar exposure may carry into the month ahead even though the DXY index carves a Bear Flag continuation pattern in August, and the crowding behavior may continue to coincide with the bullish price action in gold as the low interest rate environment along with the ballooning central bank balance sheets heightens the appeal of the precious metal as an alternative to fiat-currencies.

With that said, current market conditions may keep bullion afloat as the FOMC appears to be on track to retain the status quo in September, while the technical outlook for the price of gold remains constructive as it trades to fresh yearly highs during every single month so far in 2020.