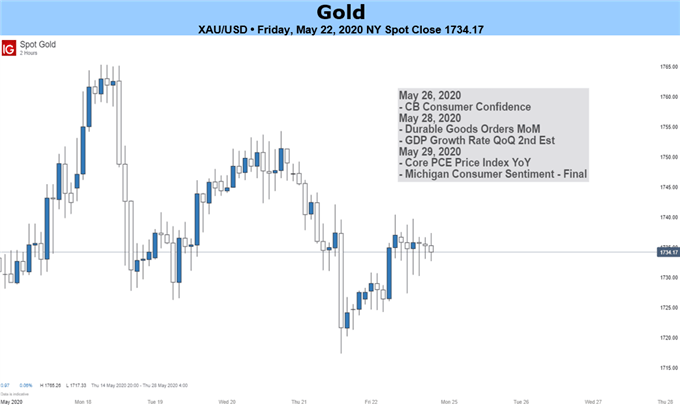 Gold prices may come under pressure as the political fissure between the US and China widens over a familiar and thorny topic: Hong Kong. Beijing is reportedly intending on inserting legal provisions into the autonomous state’s charter. Some of these policies include measures aimed at curbing secession, foreign interference and sedition.

These policies are coming on the heels of the 2019 protests that drew global attention and widened the rift between the US and China at a time when both were locking horns in a trade war. In response to this recent development, the US senate is planning to introduce a piece of legislation that would sanction Chinese officials and entities that enforced Beijing’s legal incisions.

US President Donald Trump also warned that the US would respond with retaliatory measures if China did anything to curtail protests and democratic movements in Hong Kong. Relations between Washington and Beijing were already shaky amid the pandemic as US lawmakers including the president himself hurled accusations against China for their mishandling of the virus.

US GDP Data May Inspire Liquidation in Gold

Gold prices may face heightened liquidation pressure if the second reading for Q1 US GDP data falls below the -4.8 percent estimate. If the report falls in-line with forecasts, it would mark the strongest contraction since the 2008 financial meltdown. The shelter-in-place orders implemented by federal and state government has crushed business revenue and consumption.

The latter also happens to be another key indicator that will be released on the same day. The secondary reading for Q1 personal consumption data is anticipated to show a -7.4 percent print, slightly less than the previous -7.6 figure. Over 70 percent of the US economic growth comes from individual consumption, which in light of double digit unemployment figures is likely going to get worse before it gets better.

The Fed will also be releasing the closely-scrutinized Beige Book report, formally known as the Summary of Commentary on Current Economic Conditions. If the surveys conducted in the districts of each of the Federal Reserve’s branches highlights worsening economic conditions, it could sour risk appetite and weigh on gold prices.

While gold can at times be referred to as a “safe haven” by investors, the more prominent dynamic of the yellow metal seems to be a function as an anti-fiat hedge. XAU/USD initially rallied at the expense of deteriorating market mood amid the selloff in March. Because the Fed at the time still had room to cut interest rates, gold’s appeal as an anti-fiat hedge remained intact. However, this dynamic changed after a key decision and announcement by officials.

Gold Prices Tumbled With Equities Amid Virus-Induced Selloff, Then Recovers With Stocks

After monetary authorities cut interest rates to zero and signaled they were not interested in venturing into negative territory, gold’s appeal as an anti-fiat hedge further evaporated. What traders were left with was a comparatively illiquid asset and as a result, demand for cash boosted the US Dollar at the expense of the yellow metal. Follow me on Twitter @ZabelinDimtri for more information.