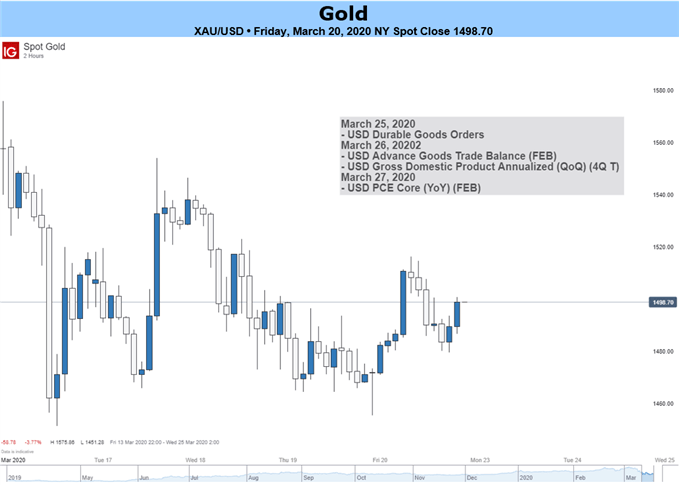 Will the Fed be Able to Shield the US Economy from Recession?

The short answer is “probably not”. Over the past 30 days, not only has the Fed first cut interest rates outside of its regularly scheduled meetings by 50 basis points, but it has brought the lower bound for the target rate range back to zero. This is in addition to its $700 billion quantitative easing program with $500 targeting Treasuries and $200 billion of mortgage-backed securities.

Will US Government Fiscal Package be Enough to Stave Off Recession?

On Thursday, the Republican-held Senate proposed a $1 trillion stimulus package known as the Coronavirus Aid, Relief, and Economic Security Act – or CARES for short – that entails sending $1,200 checks to every qualifying American. The cap is set at individuals making $75,000 and couples with a joint income of $150,000.

Lawmakers are contemplating a second round of checks if economic conditions materially worsen and warrant another cash injection. Treasury Secretary Steven Mnuchin said once Congress passes the bill, checks will be delivered to peoples’ doorsteps in three weeks. Other measures included waivers on student loan interest payments to all government agencies and the suspension of evictions and foreclosures.

If the stimulus is able to reduce the likelihood of a recession – or at least, reduce the severity of one – gold prices may nurse some of their losses. On the other hand, officials have to consider the external effect of the coronavirus on investment, which had been under strain and only attempted to recover recently when geopolitical tensions – like the US-China trade war – seemed to ease. The coronavirus outbreak has probably snuffed out those early gains.

On March 23, the US Financial Stability Oversight Council will meet to discuss the market impact of the coronavirus. It was originally formed after the 2008 financial crash. Commentary from these officials may have the capacity to elicit volatility. Officials will likely express concern about the fragile corporate debt market and companies with exposure to the multi-trillion dollar leveraged loan space.

The March 24-25 G-7 foreign ministers meeting was cancelled and will now be conducted via video teleconference. Announcements from this event about coordinated measures to combat the virus may help to quell some angst, but the uplifting power of platitudes is unlikely to prove lasting without concrete action. Nonetheless, it still warrants the attention of traders because of what it could mean for policy going forward.

Preliminary Markit manufacturing, services and composite PMI for March may amplify risk aversion if these key metrics of for the world’s largest economy show a picture that is even more dismal than expected. That could inflate what are already ballooning recession fears battering down the walls of confidence investors had put up for over two years in the face of growing evidence that the underlying outlook has been deteriorating.