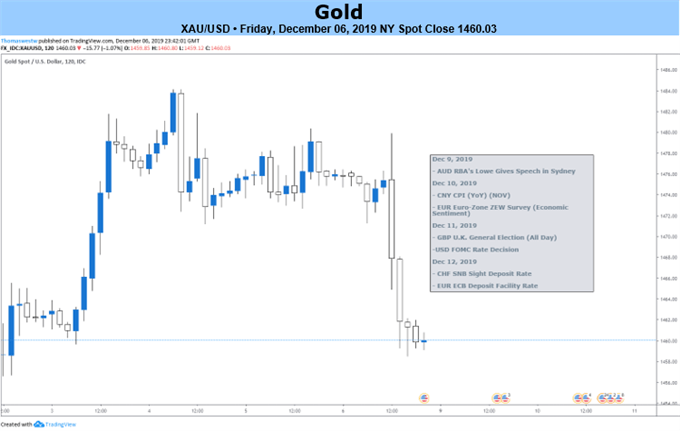 Get our free guide to help build confidence in your gold trading strategy !

Gold price action has been relatively staid since the metal topped in early September. A modest pullback since then tracked inversely of a move away from dovish extremes on priced-in 2020 Fed policy bets. That seemed to reflect heightened hopes for a “phase one” US-China trade deal and an orderly Brexit.

That selling pressure has been notably restrained probably speaks to these would-be tailwinds’ tendency to overpromise and underdeliver. Relations between Washing and Beijing seem to be getting frostier again after weeks of cheery promise-making, casting doubt on whether anything is achievable near-term.

Meanwhile, it may prove premature to presume that a Tory triumph at the ballot box necessarily means a “no-deal” scenario cannot happen. Restoring a Conservative majority does not guarantee that its Prime Minister will pass a Brexit deal. Just ask Theresa May. 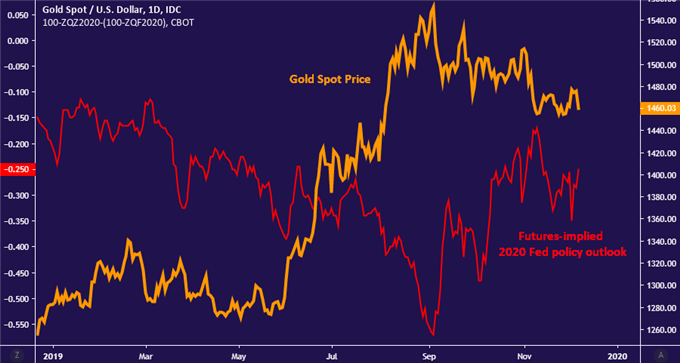 The FOMC monetary policy announcement is first in focus in the week ahead. Chair Powell and company emerged as cheerleaders of the markets’ recent optimism at their last sit-down, signaling that rate cuts have been put on hold. Investors will want to gauge whether their confidence remains firm.

A sudden about-face in forward guidance seems almost certainly not in the cards. At the same time, failing to acknowledge recent setbacks might seem worryingly overconfident. At least, Mr Powell might be pushed to restate that the Fed stands ready to ease further, as required.

The UK general election is the other bit of heavy-duty event risk to contend with. Boris Johnson seems likely to return as Prime Minister, but he may yet be unable to secure a comfortable path to passing his version of a Brexit deal through Parliament.

On balance, this may help gold prices recover. If the US central bank appears be moderating earlier confidence while the UK poll leaves the door open to a “no-deal” Brexit, the markets’ disappointment is likely to bring bond yields lower. That bodes relatively well for the non-interest-bearing yellow metal.