Gold Prices May Oscillate Between Trade Wars, US Economic Data 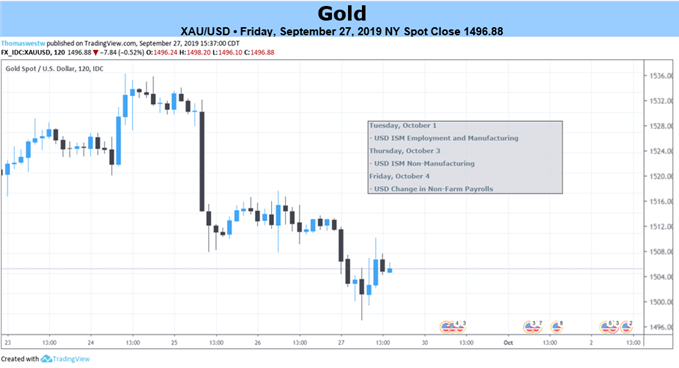 Gold prices may find themselves torn between positive US economic data that removes the urgency for the Fed to cut rates further and trade war uncertainty that warrants action from the central bank. A cooling trade-related tensions between Beijing and Washington has buoyed market sentiment, and over the past few months, US economic data has been rapidly improving after a multi-month interim of severe underperformance.

Combined, both of these factors have shown to be a headwind for gold prices because they downgrade pressure on the Fed to cut interest rates. As a non-interest-bearing asset, the yellow metal tends to rise against the backdrop of dovish monetary policy expectations. With investors expecting rates to be lower in the future, the cost of holding gold becomes comparatively lower but its appeal as an anti-fiat hedge is enhanced across the market.

Next week, the economic docket is packed with key indicators including US PMI, unemployment and non-farm payroll data in addition to factory and durable goods orders. Lower-than-expected readings out of these reports may boost gold prices if they lead to a rise in Fed rate cut bets. On the US-China trade war front, officials announced key talks are set to resume October 10-11 in Washington DC.

However, given the fickle nature of US-China trade relations up until now, it would not be surprising to see talks once again break down. If they did, gold prices would likely get a boost because this reintroduces urgency for the central bank to insulate the US economy from the negative impact the conflict has on domestic growth prospects. Fed rate cut bets may spike as a result, along with demand for the yellow metal.