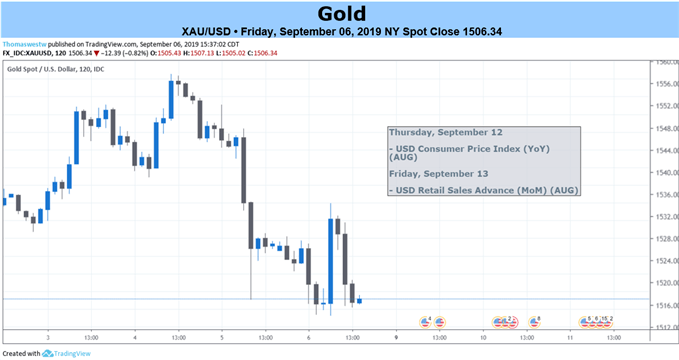 The weekly gold forecast is neutral with a mildly bullish tilt. The US-China trade war rumbles on, driving risk-off sentiment, while Chinese and US monetary policy may well fuel further risk-on sentiment. On balance it may be best to stick to the sidelines at these current, elevated levels.

Gold has traded in a $50/oz. range during the week but is closing relatively unchanged over the last five days with a slightly bullish momentum helping to re-coup losses. Market volatility has again been driven by the US and China, with trade war rhetoric early in the week giving way to the liquidity measures and interest rate cut expectations as the week ends.

At the start of the week there were mildly positive noises around the ongoing US-China trade war with both sides agreeing to meet this month. While all ‘noise’ around the trade dispute should be treated with caution, any positive move would give the market a sharp risk-on boost and push the price of gold back below $1,500/oz. Risk-on was also given a nudge after Hong Kong chief executive Carrie Lam withdrew the contentious extradition bill that had fueled months of street protests. While a positive, protests are expected to continue as Ms. Lam refuses to give in to the protesters other four demands.

The end of the week saw monetary policy rear its head with China announcing a cut to its reserve ratio requirement (RRR), the third time this year. The measures should free up Chinese banks’ balance sheets to lend around another 800 billion yuan (USD120 billion) to boost the economy, especially important as the US-China trade war rumbles on.

Friday’s mixed US Labor Report will have interested US President Donald Trump as job growth slowed while wages grew. The Fed is fully expected to cut interest rates by 0.25% at the September 18 FOMC meeting but the President wants more, and today’s jobs figures will give him more ammunition to press down on the Fed for further cuts. A weaker US dollar - helped by lower interest rates - boosts gold allure.

The calendar next week shows three high importance data releases in the US - all potential US dollar movers - while there will be no more Fed speak ahead of the FOMC meeting.

Overall, the market is likely to remain at, or close to, current levels with a slight upside bias. Thursday sell-off caught bulls off-guard yet today’s post-NFP rebound continues to suggest that bulls remain in control of the market and continue to buy dips for now. 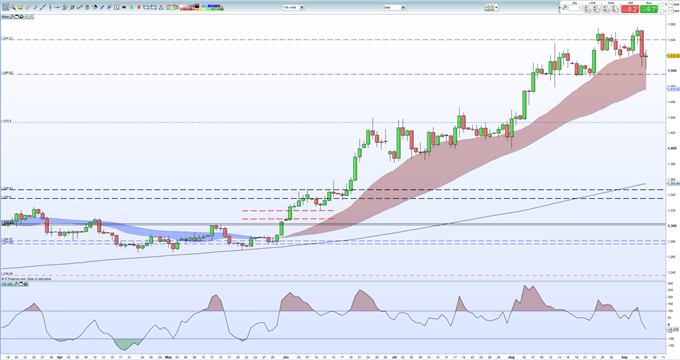 The IG Client Sentiment Indicator shows retail traders are 64.5% net-long of Gold, a bearish contrarian bias. However daily and weekly changes give us a stronger spot Gold bearish trading bias.

What is your view on Gold – bullish or bearish?? You can let us know via the form at the end of this piece or you can contact the author at nicholas.cawley@ig.comor via Twitter @nickcawley1.