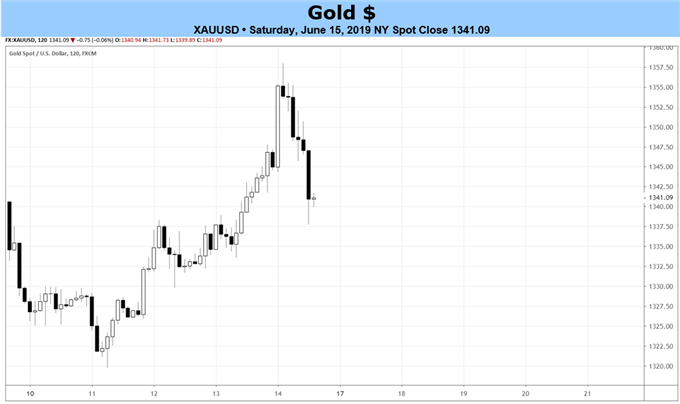 From the point of view of the US Dollar, gold prices had a disappointing week. After gaining as much as 1.28% on their way to fresh yearly highs and their highest levels since the second week of April 2018, gold prices in USD-terms (XAUUSD) were only able to close higher by 0.04%. The late-week rebound by the US Dollar amid speculation that the June Fed meeting won’t produce any immediate dovish policy action has left traders facing down a doji on the weekly chart.

But just because gold prices in USD-terms (XAUUSD) had a middling performance doesn’t mean that bullion’s gains haven’t continued elsewhere. Indeed, with the US-China trade war simmering away, the best performing crosses were gold prices in AUD-terms (XAUAUD 2%) and gold prices NZD-terms (XAUNZD 2.78%). Meanwhile, with and the latest Brexit developments once again seeing no deal, ‘hard Brexit’ odds rising, gold prices in GBP-terms (XAUGBP 1.29%) rallied for the seventh time in eight weeks.

Despite improved trading conditions for global equity markets in recent weeks, not much has changed in a positive manner along the US-led trade war front. There is a strong argument to be made that the only change has been signaling by central banks that more accommodative, dovish policy is around the corner, which, as it has led to falling sovereign bond yields (particularly German Bunds, UK Gilts, and US Treasuries since the start of May), a genuinely bullish fundamental catalyst for gold prices.

Furthermore, with gold volatility (as measured by GVZ, the Cboe’s Gold volatility ETF) touching its highest absolute level since March 20 (the day of the March Fed meeting) and closing last week at its highest level since January 6, the proliferation of ‘uncertainty’ remains a bullish fundamental catalyst for gold prices.

The rising odds of no deal, ‘hard Brexit’ is proving to be another bullish fundamental catalyst for gold prices. Easily capturing 40% of the vote, former London mayor and prominent Brexiteer Boris Johnson (first place with 114 votes) beat out Jeremy Hunt (second place with 43 votes) and Michael Gove (third placewith 37 votes) in the first round of the Tory party leadership elections.

If the near-term outlook for gold prices is bullish against most of the major currencies, the one place gold prices struggled last week – in USD-terms (XAUUSD 0.04%) – may prove to be a point of vulnerability in the days ahead thanks to upcoming event risk in the form of the June Fed meeting.

The June Fed meeting will see the FOMC produce a new Summary of Economic Projections (SEP), and after eliminating that prospect of another 25-bps rate hike in the rate hike cycle before the end of 2020, it seems that the FOMC is ready to formally outline its rate cut cycle moving forward. Fed funds futures are currently pricing in a 60% chance of three 25-bps rate cuts through the end of the year – this may be a high hurdle for policymakers to meet at the June Fed meeting.

Thus, it appears likely the most dovish scenario for the June Fed meeting is already being discounted by market participants; gold prices could prove vulnerable in the second half of the week if interest rate expectations reverse after Wednesday.

Significant event risk populates the upcoming FX calendar, creating an environment where gold prices should be active throughout the coming week beyond the day-to-day developments along the overarching thematic influences like the US-China trade war or the latest Brexit news.

From Monday to Wednesday, gold prices in EUR-terms (XAUEUR) will be in focus with European Central Bank President Mario Draghi speaking on three separate occasions at the ECB Forum on Central Bank. With inflation expectations depressed and growth tepid at best, the ECB has recently unveiled a third TLTRO program, which in turn has helped keep Eurozone sovereign bond yields down.

On Thursday, gold prices in JPY-terms (XAUJPY) and gold prices in GBP-terms (XAUGBP) will be in focus with the June BOJ meeting and the June BOE meeting. However, neither central bank is expected to make any interest rate changes or policy tweaks this week, so traders looking for gold volatility around these meetings on Thursday may ultimately walk away disappointed. 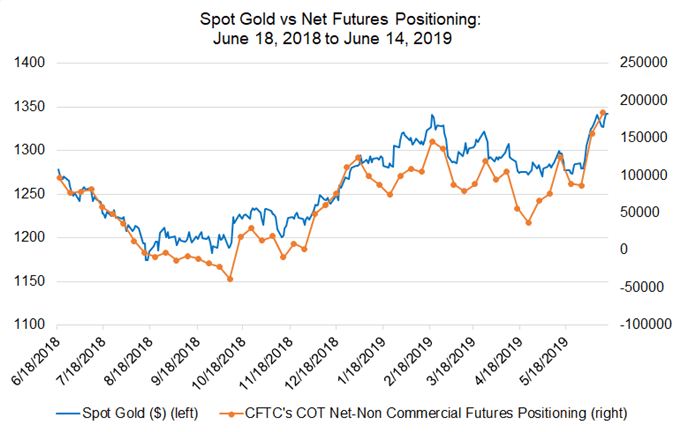 Read more: Gold Prices May Be Set to Resume Rally to Fresh 2019 Highs