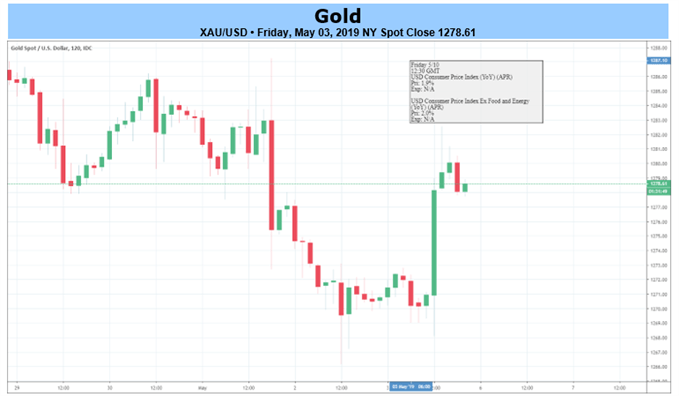 Check out the latest US Dollar forecast and see what is expected to drive prices through mid-year!

Gold prices struggled for direction last week, torn between competing influences from the FOMC monetary policy announcement and April’s US jobs report. The former sent prices lower as Chair Powell signaled the central bank’s outlook is firmly set at “neutral”, pushing back against recently growing speculation about a rate cut on the horizon. The latter offered a mixed view of the labor market, allowing for a bounce.

While headline payrolls growth registered north of expectations, the jobless rate seemingly fell for the wrong reason as labor force participation shrank and wage inflation printed slower than analysts projected. The markets seemed to focus on the downbeat aspects of the data set, with gold rising as a parallel drop in bond yields and the US Dollar bolstered the relative appeal of non-interest-bearing and anti-fiat assets.

This selective reading probably reflects a built-in desire for retracement before the week-end. The FOMC produced a sizable down move and placed prices squarely at trend support. An unmistakable signal from the jobs data was likely needed to deliver a decisive breakout, especially just ahead of the weekly close. Without such conviction, a correction may have been the de facto default response.

As the new week begins however, it is the Fed that is likely to have offered prices the longer-lasting catalyst. Scheduled commentary from Mr Powell may reinforce the central bank’s dubious stance on easing. That might be reinforced by incoming CPI data. It is expected to show that the headline and core measures of inflation moved to 2.1 percent in April, putting them close enough to target for the FOMC to stand aside.

On balance, all this bodes well for the Dollar, and thereby threatens gold. Worries about a downshift in the business cycle might animate de-risking, and the greenback will have relatively little to keep it from capitalizing on haven flows if the Fed is thought to eschew stimulus (at least in the near term). A stronger Greenback is anathema to the yellow metal, a go-to alternative to paper currency.