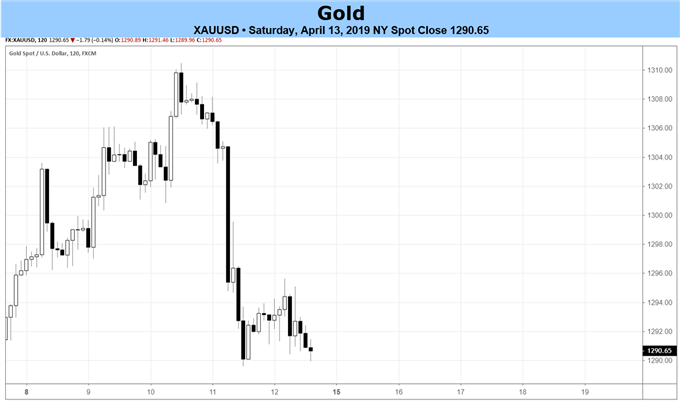 - Gold prices took a big hit at the end of the week when measures of implied volatility sunk across bond, currencies, and equities markets – a sign that risks are seemingly subsiding.

- Brexit headlines should quiet down over the coming week with UK parliament on holiday until April 23.

- The IG Client Sentiment Index shows that retail traders were buying Gold into its dip at the end of the week.

Gold prices started last week on stable footing, but stability had turned into losses by the time Friday was finished. Gold in USD-terms (XAUUSD) fell only by -0.06% on the week but had dropped by -1.51% from Thursday’s high, down to 1290.65 per ounce. Amid the swing back in risk appetite towards higher yielding, higher beta currencies and risk-correlated assets, Gold in AUD-terms (XAUAUD) and EUR-terms (XAUEUR) dropped meaningfully over the course of the entire week, falling by -1.06% and -0.84%, respectively.

The major driver in the second half of the week was the agreement between the EU and the UK that the Brexit deadline would be pushed to October 31, 2019, with a review by June 30. In response, traders took the liberty of pricing out the risk of a surprise shock to markets over the next several months, sending various measures of implied volatility tumbling in response – not just those limited to UK-related instruments but various measures of volatility across global bonds, currencies, and equities.

While the shift swings attention back towards UK domestic political dynamics and cross-party talks between UK Prime Minister and Tory party leader Theresa May and Labour party leader Jeremy Corbyn, the spotlight may not appear that bright this week. Why? UK parliament is out of session until April 23 due to the upcoming Easter week holiday.

It’s not just the less tense nature of the latest Brexit headlines that are helping lift investors’ spirits. Commentary from both sides of the Pacific Ocean over the past two weeks suggest that a trade agreement between China and the United States may be nearing completion. While there are still a fewremaining issues that need to be resolved, it appears that the Trump administration may be willing to punt on these issues until 2025 – when the next administration would have to deal with it (assuming that Trump wins a second term). Elsewhere, the EU-US trade war may be brewing after news broke on Friday that the EU may be moving forward with retaliatory tariffs on imported US goods as a result of a dispute between Airbus and Boeing.

Inflation Data Over the Coming Week

The forthcoming economic calendar doesn’t contain data or events that are directly tied to central banks, and therefore, opportunities for data-driven price action in Gold are limited in the coming week. But if there are data that could influence Gold prices, they will be the inflation data due out from across the globe: from New Zealand on Tuesday; from the UK, Eurozone, and Canada on Wednesday; and from Japan on Thursday. Typically, rates of higher inflation tend to attract investors to Gold as a store of a value; but in an environment marked by the perception of receding global risks, Gold prices may not fine a lifeline in these data this time around.