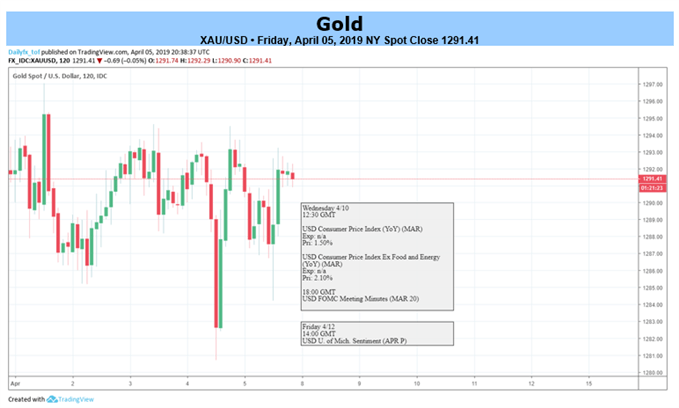 Check out the latest gold price forecast and see what is expected to drive prices through mid-year!

Gold prices spent the past six sessions locked in a narrow consolidation range, digesting after the prior week’s outsized drop. That move seemed to mark the culmination of building pressure from a recovering US Dollar and lower Treasury bond yields since mid-March. These moves sapped the appeal of anti-fiat and non-interest-bearing assets epitomized by the yellow metal.

By contrast, last week’s torpor appeared to reflect divergence in these drivers. A rebound in risk appetite capped haven-inspired demand for the Greenback and nudged it lower. Investors’ brighter disposition also translated in higher lending rates however, cutting off a pathway to the upside. US-China trade deal hopes were cited as the risk-on catalyst, but end-of-quarter flows seem at least as plausible of an influence.

Looking for a technical perspective on the gold? Check out the Weekly Gold Technical Forecast.

The week ahead may see the macro backdrop recapture the spotlight. US and Chinese trade officials have returned to their respective corners without a big-splash announcement. Meanwhile, the UK government asked the EU to postpone Brexit through June. A respite from such potent headline risk might set the stage for a reassessment of the broader landscape, where a downshift in global growth remains underway.

A worried tone from jittery central bankers may spur the pivot. Minutes from last month’s FOMC meeting – which marked a major dovish shift in the policy stance – will help illustrate what officials are afraid of. An ECB interest rate decision will almost certainly leave the current stance intact, but the occasion will give President Draghi a platform to bemoan lackluster performance and assorted downside risks.

If downbeat rhetoric translates into risk-off trading conditions, a premium on liquidity may drive the US Dollar higher even as yields retreat. The relative magnitude of these moves will determine which one ultimately sways gold prices. Absent some “black swan” outcome, Fed and ECB policy is probably locked in through 2019. This might mean that the lead from USD takes precedence, pushing the metal downward.