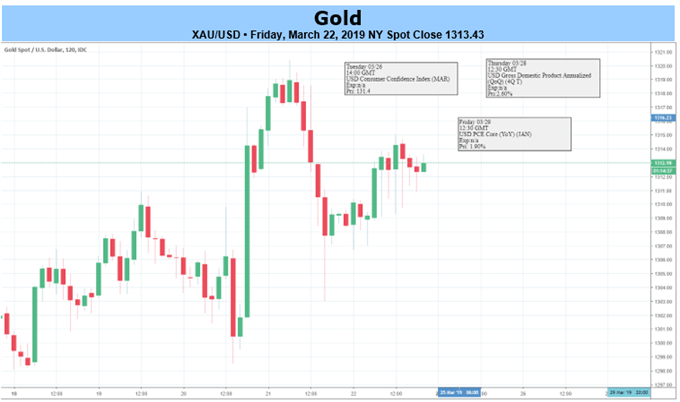 Gold prices accelerated this past week, enjoying the best 5-day performance since the end of January, rallying as much as 0.82%. Some may point to the commodity’s supposed haven-linked status for its performance, especially after the S&P 500 wiped out all of its gains for the week on Friday. A closer look reveals a slightly different picture that instead, highlights gold as an anti-fiat asset.

Looking at the chart below, the gap between US 3-month and 10-year government bond yields turned negative for the first time since 2007. This is a closely watched section of the yield curve for recession signals. In fact, the gap had already been significantly narrowing since the plunge in equities towards the end of last year. This is also despite the +20% rise in the US benchmark stock index since January.

On a short-term basis, there tends to be a very close positive correlation between that and the S&P 500. So it is quite easy to come to the conclusion that gold is necessarily a safe haven. Rather, it should be noted that the commodity has no interest-bearing qualities. As such, when yields fall (the return on cash) gold tends to become relatively more attractive and vice versa. 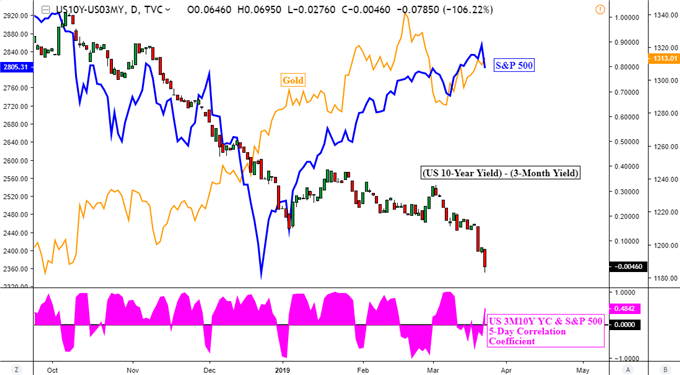 This past week contained what was arguably a surprisingly more-dovish Fed rate decision than expected. From projecting perhaps two hikes this year, we are now down to maybe a median forecast of zero and with a runoff in the balance sheet to slow down in May. US government bond yields tumbled on the news, and so too did the US Dollar. Gold couldn’t have asked for a better-case scenario.

But all is not well in the global macroeconomic fundamental picture. The world’s most-influential central bank slashed (arguably) economic growth projections, continuing to highlight external concerns such as the ongoing Brexit saga. Hence the juice equities received from a more dovish central bank didn’t quite last too long, at least for the time being.

After all, such a significant shift in the Fed’s tightening path, from gradual tightening to something closer to a neutral pause, is not without its justifications. Looking at the next chart, gold tends to inversely follow US front-end government bond yields. Even when there was a positive turn in sentiment (January), the precious metal held on to gains as yields continued falling. 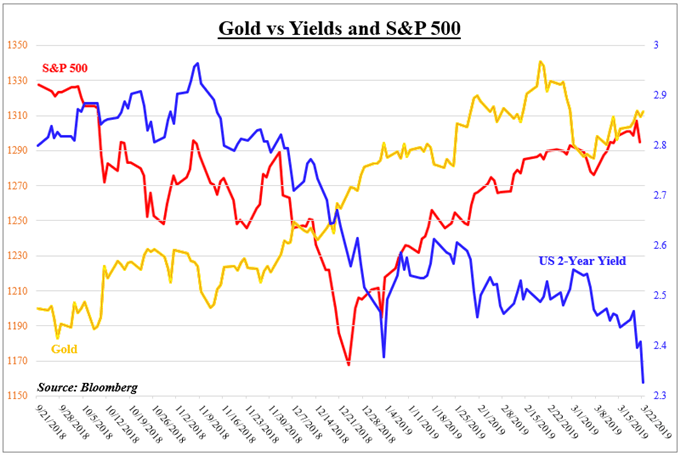 If concerns continue echoing throughout financial markets, depressing yields as demand for bonds rise, gold may extend its rally going back to August. But, what the US Dollar does in the days and weeks ahead may offset such an advance. Taking a closer look towards the end of last week revealed that XAU/USD paused its rally when bond yields and the US Dollar went their separate ways (former fell, latter rose).

Let’s not forget that gold is largely priced in the greenback, which is its liquid alternative. As such, a situation where markets suddenly turn risk-averse may result in a scenario that leaves gold range-bound. This wasn’t the case towards the end of last year, but that was largely because USD lost some upside momentum as yields fell. This reflected ebbing hawkish Fed monetary policy bets.

With fears of a global slowdown increasing (based on the analysis on the yield curve earlier), haven demand may positively impact the Greenback as its liquidity status is unrivaled. It would probably take aggressive risk aversion to send gold lower, but that seems unlikely for the time being until more US economic data crosses the wires to reveal a clearer picture on growth. With that in mind, let’s take a look at a more near-term outlook.

Looking for a technical perspective on the gold? Check out the Weekly Gold Technical Forecast.

Keep an eye out next week for US consumer confidence, the final revised 4Q GDP result and the Fed’s preferred measure of inflation (PCE core). Local economic news flow is still tending to underperform relative to economists’ expectations, hinting that downside surprises may be in store. This risks souring sentiment, sending bond yields lower as rate cut bets increase.

All things considered, the US Dollar has held up remarkably well despite a significant downgrade in the Fed’s path for interest rates. Expect more focus on the US yield curve in the week ahead now that recession signals seem to be more prevalent. While it is tempting to be bullish gold in such a scenario in the days ahead, USD gains may offset gold’s advance on falling yields. As such, the near-term gold fundamental outlook appears neutral.