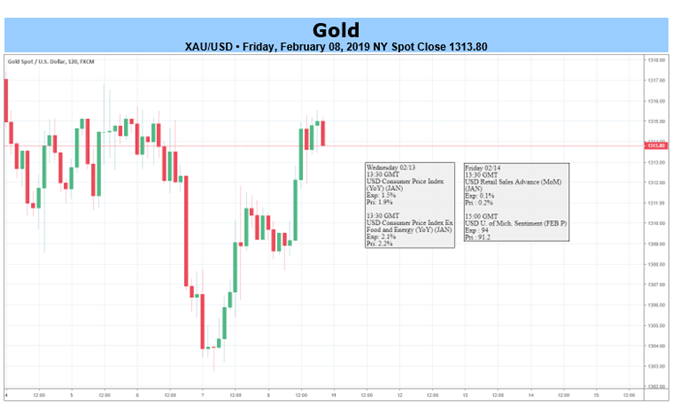 Gold pares the decline from earlier this month as a growing number of Federal Reserve strike a dovish tone, and fresh data prints coming out of the U.S. economy may fuel expectations for a more accommodative stance as the Consumer Price Index (CPI) is expected to narrow for the third consecutive month in January.

The sudden shift in Fed’s forward-guidance appears to have heighten the appeal of gold as the central bank now endorses a wait-and-see approach for monetary policy, and the Federal Open Market Committee (FOMC) may continue to tame bets for higher interest rates as ‘inflation readings have been muted.’

In fact, updates to the CPI are anticipated to show the headline reading slowing to1.5% from 1.9% per annum in December, with the core rate of inflation slipping to 2.1% from 2.2% during the same period. As a result, signs of subdued price growth may encourage the Fed to conclude the hiking-cycle ahead of schedule as St. Louis Fed President James Bullard, a 2019-voting member on the FOMC, argues that ‘market-based signals such as low market-based inflationexpectations and a threatening yield curve inversion suggestthat the FOMC needs to tread carefully going forward.’

At the same time, it remains to be seen if the Fed will ultimately taper the $50B/month in quantitative tightening (QT) as ‘the level of reserves that are going to beneeded in our new floor system is probably going to be quite abit higher than what many would have thought even one or twoyears ago,’ and the central bank may merely attempt to buy more time at the next meeting in March amid the ‘elevated uncertainty around several unresolvedgovernment policy issues, including Brexit, ongoing trade negotiations, and the effects from thepartial government shutdown in the United States.’

Looking for a technical perspective on Gold? Check out the Weekly Gold Technical Forecast. 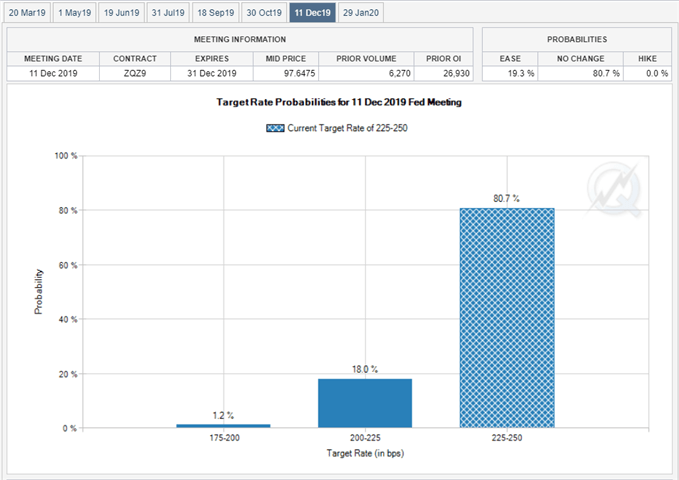 Looking ahead, Chairman Jerome Powell is slated to deliver another speech on February 12, with market participants largely geared towards a dovish statement as Fed Fund Futures show the central bank on hold throughout 2019, and gold may exhibit a more bullish behavior over the near-term as the price for bullioncontinues to track the upward trend from late-2018.Sign up and join DailyFX Currency Analyst David Song LIVE for an opportunity to discuss potential trade setups! 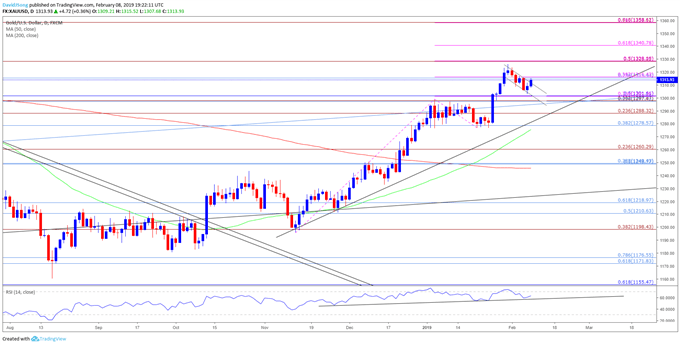 The broader outlook for gold remains constructive as both price and the Relative Strength Index (RSI) track the bullish trends from late-2018, but the lack of momentum to break/close above the $1328 (50% expansion) to $1329 (50% expansion) region raises the risk for a near-term correction especially as the momentum indicator falls back from overbought territory.

Nevertheless, a bull-flag formation appears to be unfolding as the former-resistance zone offers around $1298 (23.6% retracement) to $1302 (50% retracement) offers support, with gold at risk of exhibiting a more bullish behavior over the coming days as it initiates a fresh series of higher highs & lows. Need a break/close back above $1316 (23.6% retracement) to see another run at $1328 (50% expansion), with a break/close above the stated region bringing the $1340 (61.8% expansion) on the radar. Will also keep a close eye on the RSI as it appears to be responding to trendline support, with a move above 70 raising the risk for fresh 2019 highs in gold as the bullish momentum resurfaces.