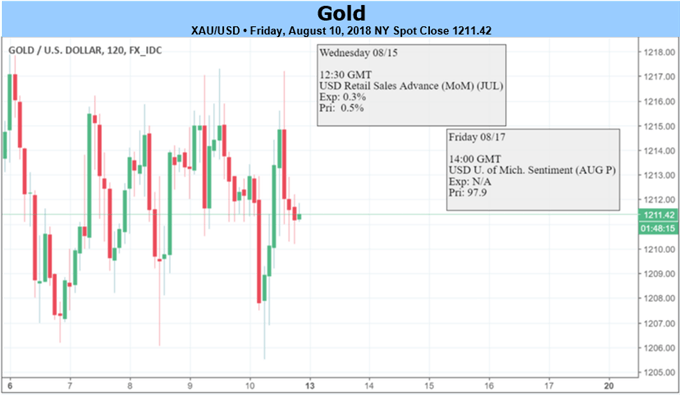 Gold prices are lower for the fifth consecutive week with the precious metal down 0.3% to trade at 1211 ahead of the New York close on Friday. The decline takes price back into key support we’ve been tracking for weeks now and comes amid rising geo-political tensions and as broader equity markets flat-lined. Renewed strength in the US Dollar has been unable to materially impact gold as of late with haven demand starting to offer more meaningful support for the battered metal. But is it enough to turn the tide on this massive multi-month sell-off?

Signs that the US economy remains on solid footing were reinforced on Friday with the August US Consumer Price Index (CPI) showing a surprise uptick in the core rate of inflation to the tune of 2.4% y/y. Fed Fund futures are still pricing in a 60% chance for a fourth rate hike in December – remember, expectations for highs rates will typically weigh on gold prices which have already been hampered by continued strength in the US Dollar.

However with mounting geo-political tensions (the China Trade War, the economic rift with Turkey and the announcement of increased sanctions on Russia), a flight to safety may yet offer some support to gold prices which have plummeted more than 11% off the yearly highs. Despite the decline in price, gold has managed to hold just above a key pivot in price and heading into next week the focus remains on a reaction off the recent lows. 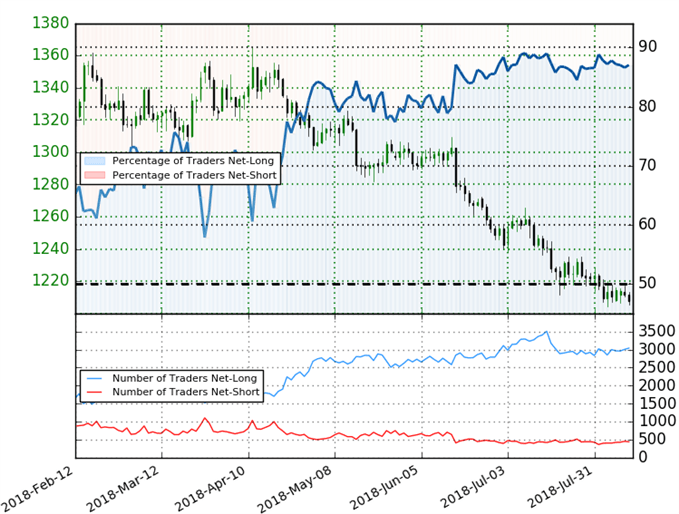 For weeks now we’ve noted that, “It’s too risky to begin positioning for a turn, but the threat of a near-term recovery remains evident while above the lower 50-line / 2017 March low-week close at ~1204,” with our expectations for, “side-ways–to-lower price action.” The outlook remains unchanged heading into next week as prices continue to hold just above support.

“Note that weekly RSI is probing a break into oversold territory and IF prices were to close here, the risk would remain weighted to the downside heading into next week from a momentum perspective. That said, look for interim resistance at 1234/36 where the 200-week moving average and the December low converge on the median-line of the broad descending pitchfork formation we’ve been tracking off the 2017 / 2018 highs. A weekly close above this threshold would be needed to suggest that a more significant low is in place. A break lower from here targets subsequent objectives at the 50-line around ~1190s backed closely by a structural support confluence at 1175/80(area of interest for possible exhaustion / long-entries IF reached).”

Bottom line: “Although the broader risk remains weighted to the downside, gold prices have responded to a major support pivot and could offer a near-term reprieve to the recent selling pressure. The immediate focus heading into next week is on the 1204 support pivot.” For a complete technical breakdown of the near-term Gold price levels (daily & intraday), review last week’s XAU/USD Technical Outlook.