Gold prices fell for the second consecutive week with the precious metal down 1.1% to trade at 1230 ahead of the New York close on Friday. The decline to fresh yearly lows comes amid continued strength in broader risk appetite with all three major US equity indices closing higher on the week- despite building trade war tensions. The market focus has started to shift however as a fresh batch of commentary from President Trump brings into question the both the US trade & monetary policy outlooks. So do these developments really have the potential to shift interest rate expectations OR is this just the spark needed to awaken the long-dormant gold bulls? - The technicals suggest we’ll find out soon.

At this week’s Semi-annual Humphrey Hawkins testimony before congress, Federal Reserve Chairman Jerome Powell reaffirmed the central bank’s pledge to normalize rates amid continued strength in the underlying economy. While the data remains supportive, the Chair did cite concerns over the threat of the ongoing tariff war IF the process were to extend into a protracted dispute. The remarks fueled some strength in the greenback with the US Dollar (DXY) stretching to fresh yearly highs this week.

The game changer for price came late in the week when comments made by President Trump this week sparked some much needed demand for the yellow metal. Trump’s remarks regarding his preference for lower interest rates should come as no surprise to market participants and while markets have turned on the USD near-term, the outlook for interest rates remains rather stable with Fed Fund Futures still pricing a ~58% chance for a fourth rate-hike this year in December.

Gold traders will be taking cues from US Dollar price action next week with the European Central Bank (ECB) interest rate decision and the advanced read on 2Q US GDP highlighting the economic docket into the close of the month. For Gold, expectations that Trump’s remarks could somehow slow the pace of interest rate hikes (although highly unlikely) may have offered a catalyst in price. Alongside weakness in the USD, the event may fuel some further recovery in price and after this week’s reaction, the shorts are on notice. From a technical standpoint however, the damage done by the recent breakdown casts a shadow on the near-term price outlook and the focus is on whether price can build on this rebound next week. 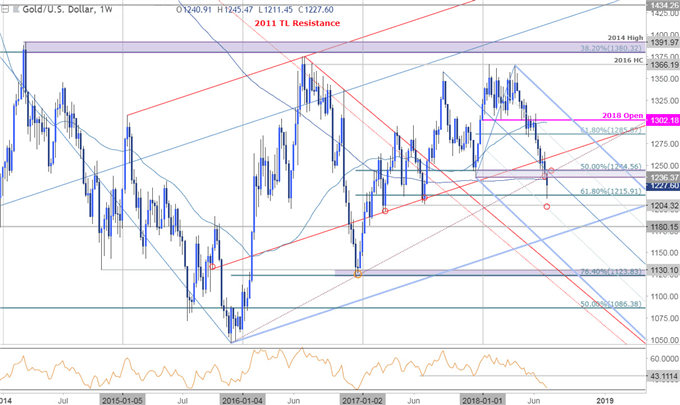 Gold prices broke below a critical support zone we’ve been tracking for months now at “the 50% retracement of the late 2016 advance at 1245 backed closely by the 200-week moving average / trendline support at ~1235.” The move marks a clear break of the July opening range, and keeps the focus on a late-month low in price.

The decline saw a strong reaction at the key 61.8% retracement at 1215 into the close of the week and while the broader risk remains lower, a recovery of sorts may be on the cards in the days ahead. Keep in mind, gold prices have seen just 4 up-weeks in the last 14! It’s too risky to begin positioning for a turn, but the threat of a near-term recovery remains evident while above the lower 50-line / 2017 March low-week close at ~1204.

Bottom line: Expect side-ways–to-lower price action with a breach above the median-line needed to suggest a more significant low is in place. For a complete technical breakdown of the near-term Gold price levels (daily & intraday), review this week’s XAU/USD Technical Outlook.