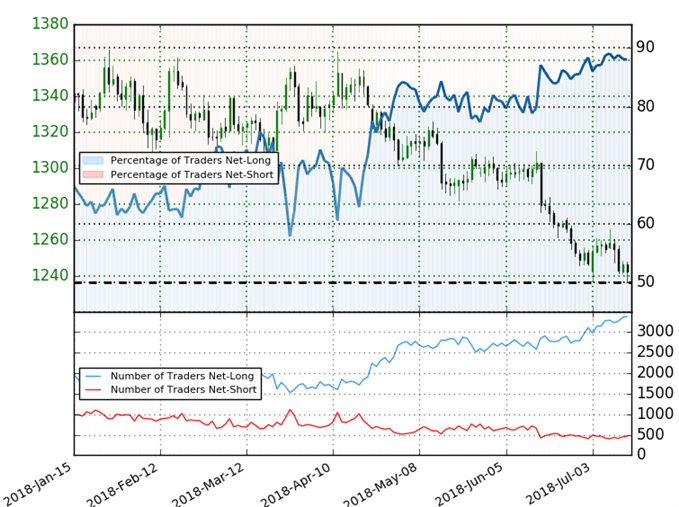 Gold prices moved lower this week with the precious metal down 1.3% to trade at 1239 ahead of the New York close on Friday. The decline comes amid renewed strength in the greenback with the US Dollar Index (DXY) rallying more than 1% on the week. Concerns over the looming global trade war seem to have abated in the near-term with headlines out of the UK regarding the ongoing Brexit negotiations and Presidents Trump’s European tour taking center stage. Broader risk appetite has remained positive with all three major US equity indices closing higher on the week.

All Eyes on Powell

Traders will be lending a keen ear to comments made by Federal Reserve Chairman Jerome Powell next week at the semi-annual Humphrey Hawkins testimony before congress. This week’s release of the U.S. Consumer Price Index (CPI) showed an up-tick in the core rate of inflation to 2.3% y/y. With the labor markets more-or-less at the central bank’s ‘natural rate’ of unemployment, the inflationary picture has remained the committee’s primary focus in determining when to raise rates. Investors will be looking for clues from Chairman Powell as it pertains to the timing of future hikes – keep in mind that markets are currently pricing in an 85% likelihood for a 25bps hike in September and 59% for another hike in December (in line with the FOMC dot plot expectations for four hikes).

That said, there may be limited upside for the USD next week based on shifts in rate-hike expectations- a development that could help alleviate some of the downside pressure on gold. Note that expectations for higher interest rates will tend to weigh on demand for the yellow metal and with the rate outlook largely priced at the Fed’s projected path, this headwind should abate in the coming weeks. For gold, the focus remains on a key technical support confluence with the broader short-bias at risk while above 1235. 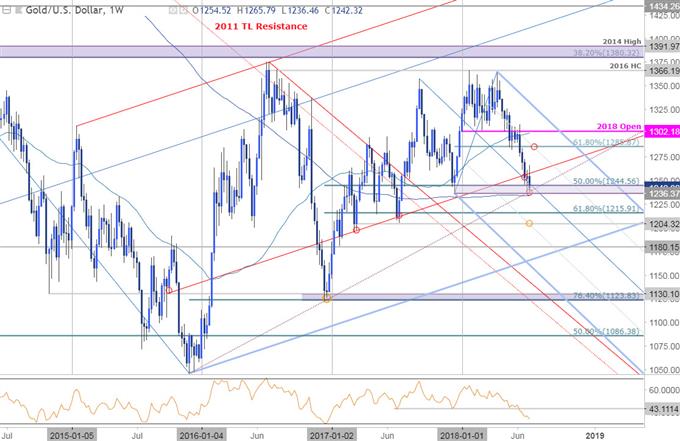 The technical picture has remain unchanged for the last three weeks with the focus still on critical support confluence at, “the 50% retracement of the late 2016 advance at 1245 backed closely by the 200-week moving average / trendline support at ~1235.” Price has continued to defend this threshold on a weekly close basis keeps the medium-term outlook neutral for now until we get further clarity on a near-term construct in price.

Bottom line: We’re looking for a low - gold has responded to key weekly support and the immediate focus is on the June opening range with the broader downtrend at risk while above 1235. For a complete technical breakdown of the near-term Gold price levels (daily & intraday), review this week’s XAU/USD Technical Outlook.