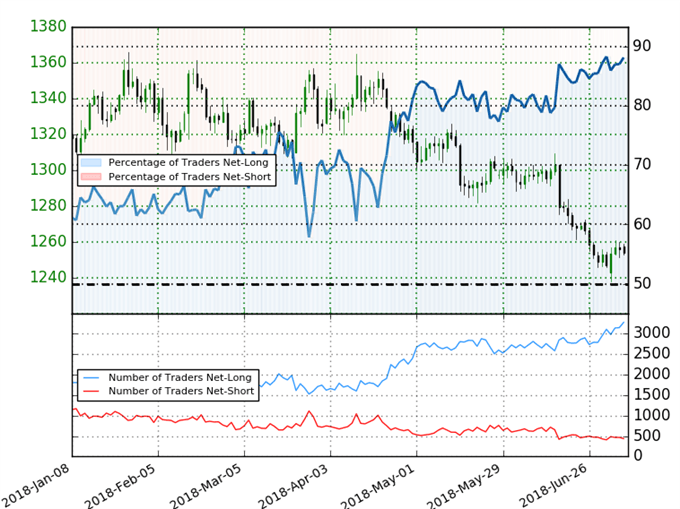 Gold prices are poised to snap a three-week losing streak with the precious metal inching higher by nearly 0.2% to trade at 1255 ahead of the New York close on Friday. The reprieve from the recent selling pressure comes alongside a rebound in broader risk appetite with all three major US equity indices closing higher on the week despite ongoing concerns over the mounting trade war with China. For gold, the tariff battle represents a glimmer of hope for the bulls and the focus is on whether or not price can follow through on this week’s reversal off support.

US Non-Farm Payrolls (NFP) released on Friday topped consensus estimates with a print of 213K for the month of June. Although the headline unemployment rate up-ticked to 4% from 3.8%, the move was accompanied by expansion in the Labor Force Participation rate which moved up to 62.9% from 62.7% a month earlier- a welcomed development. Overshadowing the report however was softness in the wage inflation figures with average hourly earnings holding steady at 2.7%- missing expectations for an up-tick.

So what does all this mean for the Fed? We’ve long stated that the central bank’s primary concern in recent years has been the inflationary outlook and with wage growth still rather subdued, the FOMC is unlikely to hasten its normalization process (interest rate hikes). The markets responded in kind with equities rallying into the close of the week on the prospects of a more gradual approach from the Fed.

Heading into next week, traders will be eyeing the release of the June Consumer Price Index (CPI) for yet another update on the broader inflationary conditions. As it pertains to gold, Friday’s release does little to impact the broader outlook with the main focus for investors fixated on the looming trade war. While the future of this conflict remains uncertain, the risk it presents to near-term investor sentiment may play a role in alleviating some of the recent pressure in gold prices and the focus is on this week’s rebound off long-term support. 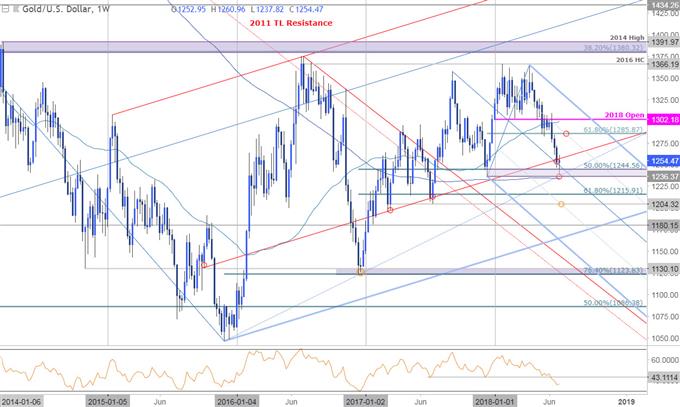 In last weekly gold forecast, we highlighted key support targets at, “the 50% retracement of the late 2016 advance at 1245 backed closely by the 200-week moving average / trendline support at ~1235.” Gold registered a low at 1237this week before rebounding sharply. So is a low in place?

Bottom line: Gold has responded to key weekly support and the immediate focus is on the June opening range with the broader downtrend at risk while above 1236. For a complete technical breakdown of the near-term Gold price levels (daily & intraday), review this week’s XAU/USD Technical Outlook.