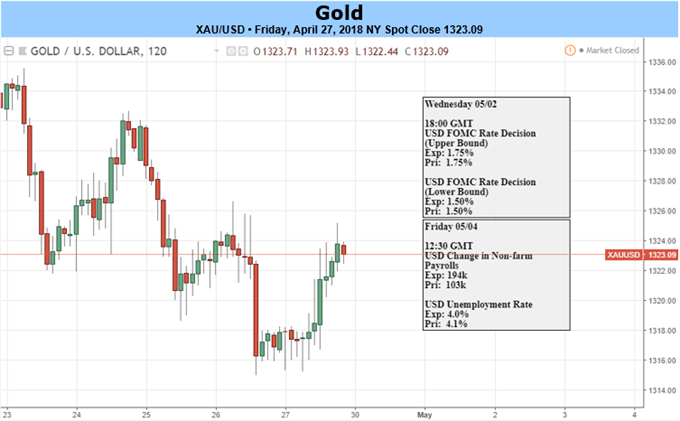 Gold notably softer for the week with prices slipping some 1.5% as the precious metal eyes the bottom end of its range. The crowded short USD trade has begun to unwind with the greenback seeing a near 2% rise this week as the US 10yr treasury yield breached 3% (highest since January 2014, while geopolitical tensions have eased somewhat amid the historic Korean summit. This suggests the trend lower in Gold is set to continue with prices targeting the bottom of its 2018 range.

The US Dollar is on course for its best week since 2016 amid the push higher in US treasury yields (4yr highs), which had seen the greenback push firmly through 91.00 and now eying the 23.6% Fibonacci retracement of the 2017-2018 fall (103.84-88.19) at 91.88 before a look at 92.00. As the US 10yr treasury yield broke the psychological 3% level, demand had been sapped from the non-interest yielding asset. Rising US yields are set to continue alongside increased bets of a more hawkish Fed, reflected in the latest CME FedWatch with expectations of 3 additionally rate hikes up slightly at 46% from 44.2%.

Geopolitical tensions have somewhat diminished this week subsequently weighing on gold prices. The US administration led by Treasury Secretary Mnuchin is to meet with Chinese trade representatives in order to negotiate and potentially reach an agreement on trade. Elsewhere, tensions eased on the Korean peninsula after a historic Korean summit on Friday, whereby North Korea agreed to denuclearize and sign a peace treaty later this year with South Korea. As a reminder, US steel and metal tariffs are set to come into effect on May 1st.

A plethora of key risk events from out of the US, most notably the FOMC rate decision could see a volatile week for gold. It is not expected that the Federal Reserve will raise rates and as such focus will be on the accompanying comments. Given the growing expectations that the central bank could provide an additional 3 rate hikes, a signal from the central bank that this may indeed be the case, will undoubtfully support the USD, subsequently pushing the precious metal lower.

Aside from the central bank, US data also kicks into high gear with the Fed focussed Core PCE data (Federal Reserves preferred measure of inflation), which is expected to hit 2%, reaching the central banks inflation target. In turn, a slight overshoot (2.1%) could argue the case for a faster pace of rate hikes. As is usually the case, the beginning of a new month will see the release of the latest US NFP report, consensus is for a healthy job gain of 185k but as has been the case for many months, focus will be on the wage component.

On the daily chart, for a material shift lower we would have to see a break through the 200DMA ($1308) before a slip through the March 1st low ($1301) and given the USD related slew of key risk events, this may well be enough to see a break out from the 2018 range. A break through this would set a test of the trendline support situated at $1280. On the topside, near-term resistance is seen at $1350, while strong resistance is seen at $1360 in a run up to the 2018 peak at $1366. Overall, given the recovery in the USD and gains looking set to continue amid a potentially more hawkish Fed, alongside the improved risk sentiment led by the developments on the Korean peninsula we are bearish on gold with the precious metal set up for a potential break lower from its 2018 range. 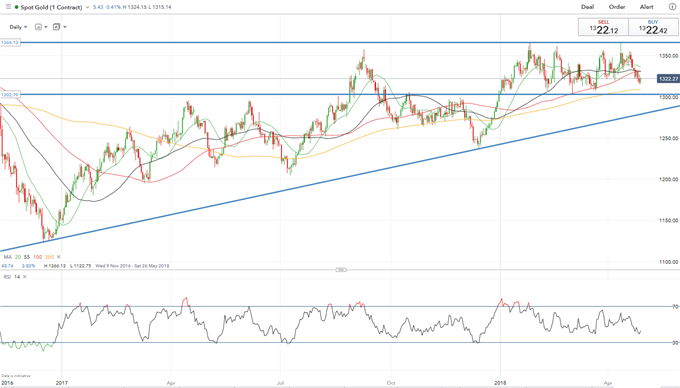