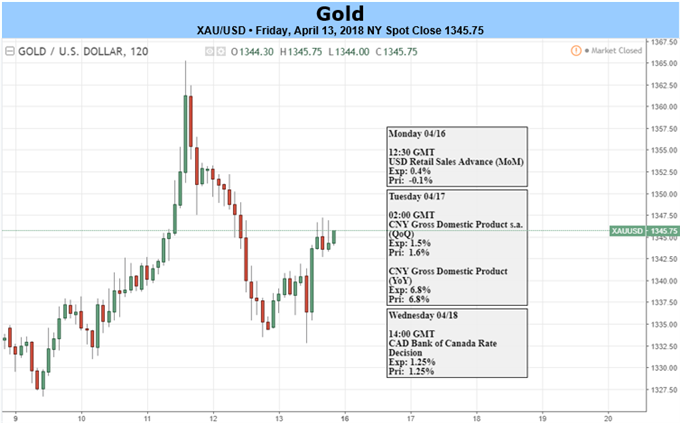 Find out what retail traders’ Gold buy and sell decisions say about the coming price trend!

Gold prices seemed like they were about to shoot for the stars last week as fears of escalating geopolitical tensions around Syria ignited risk aversion. Stocks sank and the relatively higher-yielding US Dollar fell, fueling demand for the anti-fiat yellow metal. However, this trading dynamic quickly reversed, and by Thursday gold gave up its gains from the day before. Cooling Syria conflict tensions and hawkish FOMC meeting minutes helped contribute to this.

The week ahead looks to be lighter in terms of economic statistics. The major standout being March’s US retail sales figures that are due on Tuesday. There, consumer spending is expected to increase for the first time in two months by 0.4% m/m. However, data out of the country has been falling short relative to economists’ expectations as of late. A downside surprise may boost gold if the US Dollar declines as a result.

Central bank-wise, we have a plethora of speeches from Fed policymakers that may fuel US Dollar volatility and thereby impacting gold. San Francisco Fed President John Williams, who was announced to replace New York President William Dudley, will speak on Tuesday. The latter will also present one on Wednesday shortly after the release the Fed Beige Book. An upbeat survey of regional economic conditions that echo the optimistic tone from last week’s FOMC minutes may hurt the precious metal in the near term.

As far as political developments go, keep an eye out for how Mr. Trump chooses to respond on Syria. In addition, he will be meeting with Japan’s Prime Minister Shinzo Abe on Tuesday to discuss topics such as North Korea and US import tariffs on metal. At the moment, Japan is temporarily exempted from them. If more positive developments here improve sentiment and potentially the US Dollar, gold may sink.

Thanks to the greenback’s now relatively-higher yield, it has become more sensitive to volatility in the stock markets. Sometimes, it exhibits similar behavior seen in the sentiment-linked Australian and New Zealand Dollars which also have a decent return. The catch here is that the US Dollar also poses as the world’s most liquid asset and a safe haven. So if things really turn south, the greenback may actually find itself appreciating.

What does that mean for gold? Being the anti-fiat asset with no associated yield, inversely correlated at times with the greenback. Thus, keep an eye out for risk trends and the fundamental backdrop for the greenback. The forecast for gold will have to be neutral.