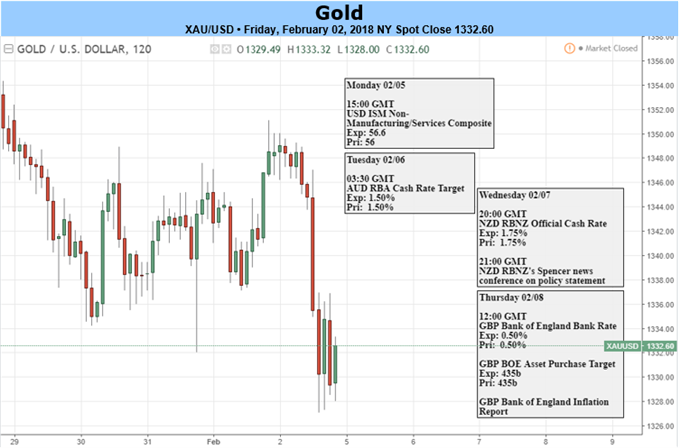 Gold prices are lower this week with the precious metal off by more than 1% to trade at 1332 ahead of the New York close on Friday. The losses come despite broader weakness in risk assets with all three major U.S. stock indices closing nearly 3% lower on the week. While gold prices may yet fall further, the decline should offer better opportunities to get back into the longer-term uptrend.

January U.S. Non-Farm Payrolls (NFP) topped estimates on Friday with a print of 200K with upward revisions to the previous months disappointing read further highlighting underlying strength in the labor markets. Most notable was a stronger-than-expected print on wage inflation figures with average hourly earnings climbing 2.9% y/y, up from an upwardly revised 2.7% y/y in December.

An improving inflationary outlook further increases the Federal Reserve’s flexibility with regards to normalizing / hiking interest rates at a faster pace. That said, today’s release is unlikely to move the needle for the current outlook for monetary policy and while markets are already pricing in a nearly 100% likelihood for a hike in March, the US Dollar did take some solace. Friday’s recovery was short-lived however and while the DXY may have further gains near-term, the broader risk remains weighted to the downside for now.

Next week traders will be eyeing the release of the January Consumer Price Index (CPI) and Retail Sales Figures. For gold, the focus will be on this recent pullback in price and while further losses are likely near-term, the broader outlook remains unchanged. 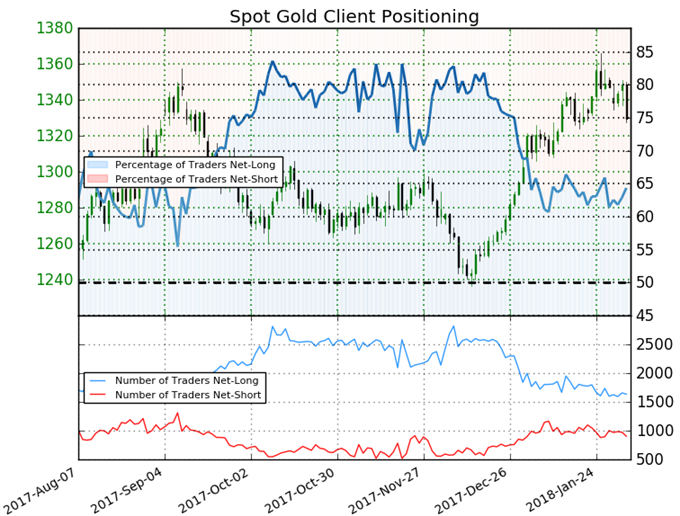 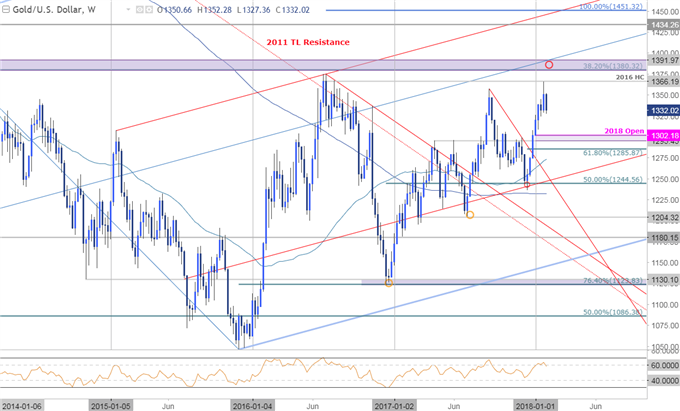 Gold prices reversed sharply off the 2016 high-close at 1366 last week with decline taking out the entire previous weeks advance. The broader uptrend remains vulnerable heading into next week with support eyed at 1295-1302 backed by our bullish invalidation at 1285. A breach higher targets key confluence resistance at 1380/92. 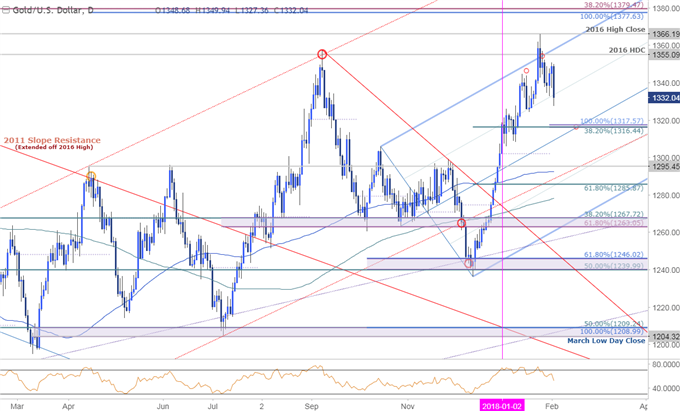 The daily chart highlights a failed attempt to break above slope resistance with the pullback now challenging the 50-line of the ascending pitchfork formation- watch the weekly close here. Note that the RSI profile now casts a corrective stance on momentum with the oscillator breaking back from overbought condition this week. 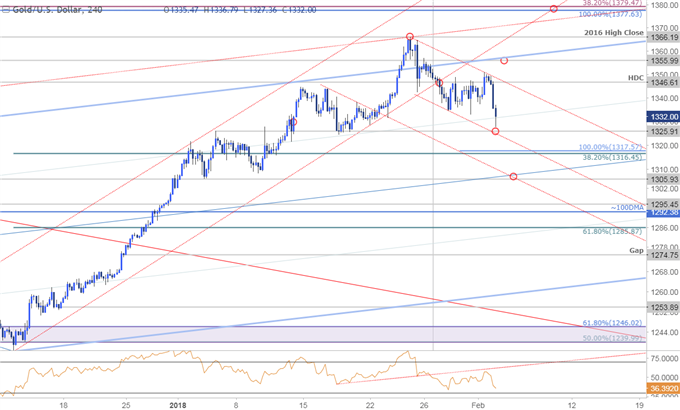 A closer look at gold shows price breaking below the ascending channel formation extending off the December lows with a newly identified descending channel highlighting near-term support at 1325. The immediate decline may be vulnerable above this threshold but the focus remains lower while within below the 2017 high-day close / channel resistance at 1346.

A break lower targets Fibonacci support at 1316/18 backed by confluence support at 1305- and area of interest for possible exhaustion / long-entries IF reached. Bottom line: the risk is lower next week with the decline to ultimately offer more favorable entries within the broader up-trend. A breach higher targets subsequent topside objectives at 1355, 1366 and 1377/79.