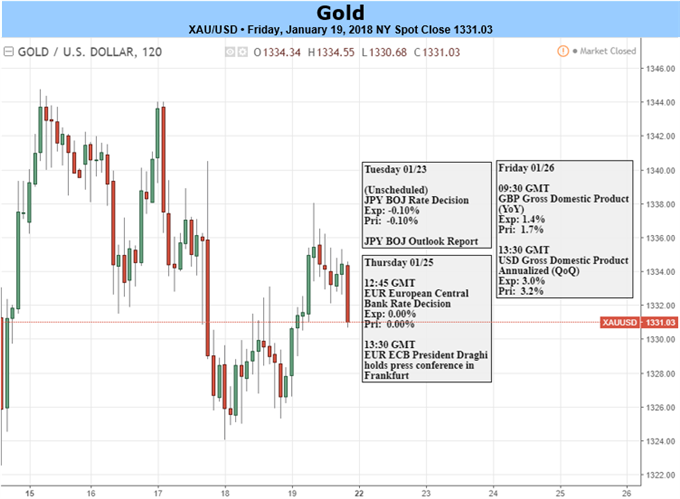 Gold prices snapped a five-week winning streak with the precious metal down 0.26% to trade at 1334 ahead of the New York close on Friday. The losses come despite continued weakness in the greenback with the DXY (Dollar Index) down nearly 0.4% as all three major US equity indices closing markedly higher on the week.

Looking ahead to next week traders will be eyeing central bank rate decision from the BoJ (Bank of Japan) and the ECB (European Central Bank) with the advanced read on 4th quarter U.S. GDP highlighting the economic calendar. Consensus estimates are calling for a print of 3%, down from 3.2% q/q in Q3 with Core PCE (Personal Consumption Expenditure) expected to rise to 1.9% q/q.

With the inflation outlook remaining the laggard of the Federal Reserve’s dual mandate of maximum employment and price stability, a stronger print on these data point next week could see interest rate expectations increase with such a scenario likely to weigh on gold demand. That said, prices have turned just ahead of resistance and although the broader picture remains constructive, the rally remains vulnerable near-term. 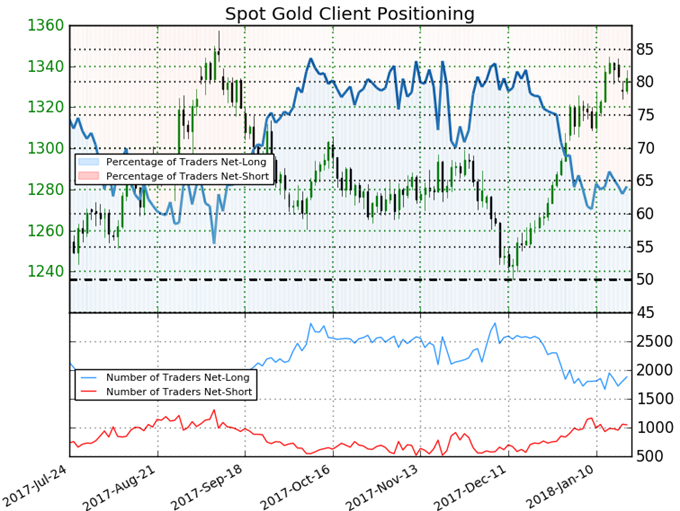 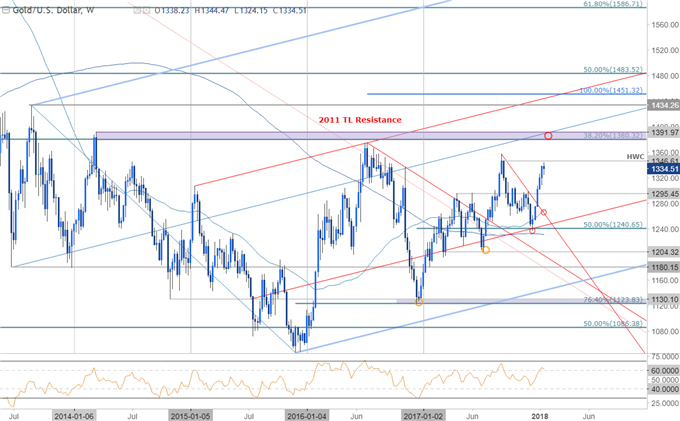 Last week we noted that the technical focus was on the breakout rally with the, “+7% advance off the December low now eyeing key technical resistance. Interestingly enough, a similar setup exists in oil prices and if the current interpretation is correct, we’ll be looking for a possible exhaustion trade early in the session.”

Indeed prices topped on Monday just ahead of the 2017 high-week close at 1346 before pulling back sharply. Two of the last four times prices posted five-week advances saw considerable corrections before resumption (April 2017 & 2012 highs). That said, this week marks the interruption with the broader uptrend at risk near-term while below 1346. 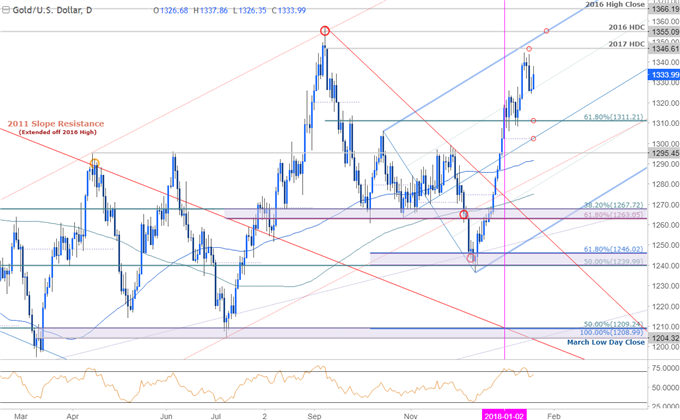 A slight adjustment to our slopes keeps prices within the confines of an ascending pitchfork formation extending off the December lows. Note that daily momentum has recovered from the overbought condition and highlights the risk for a move lower next week. Interim support rests at the monthly opening-range highs / the 50-line at 1325- a break below this threshold would shift the focus back towards 1311 with bullish invalidation now raised to the yearly open which converges on the median-line at 1302.

Bottom line: gold prices are struggling just below up-trend resistance with the advance vulnerable at these levels. That said, ultimately a pullback into slope support would have me looking for more favorable long-entries with breach of the highs targeting the 2016 high-day close at 1355.