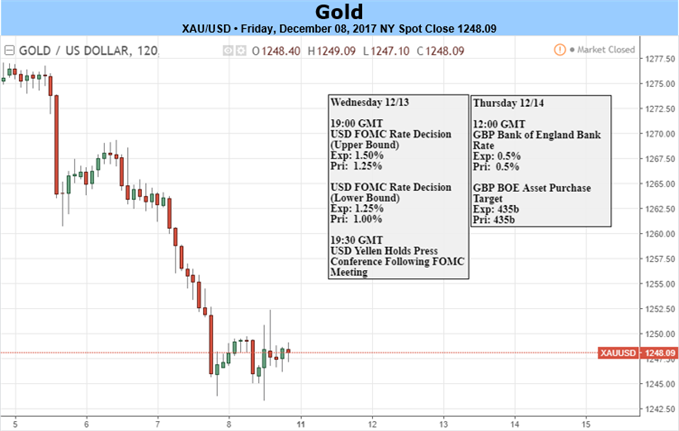 Gold prices fell for the third consecutive week with the precious metal down more than 2.5% to trade at 1247 ahead of the New York close on Friday. The losses come on the back of continued strength in the greenback with the DXY up nearly 0.9% as the focus now shifts to the Fed ahead of next week’s FOMC policy decision. Equity markets have also remained well supported throughout with all three major US indices trading higher into the close.

All eyes will be on the central bank next week with the Fed widely expected to hike interest rates by 25bps. The focus will be on the fresh quarterly projections on inflation, growth, and employment with the updated interest rate dot-plot of the utmost importance as traders weigh the outlook for monetary policy heading into 2018. Note that back in September, the dot-plot showed a median expectation that rates will be at 2-2.25% into next year with the longer-run (natural) rate steady at 3%.

Ultimately, the inflation outlook will likely be lead here as price growth (specifically wage growth) continues to persistently run below the Fed’s 2% target. Keep in mind that we also get the release of U.S. CPI figures just ahead of the policy announcement on Wednesday. The implication for bullion prices could be significant – remember that expectations for higher rates tend to weigh on the price of non-yielding assets like gold which does not pay a dividend. That said, tomorrow’s hike is largely priced in with markets largely calling for 1-2 hikes next year – the Fed dot plot (as of September) suggests 3-4 hikes. Look for changes in this spread to drive market reaction. 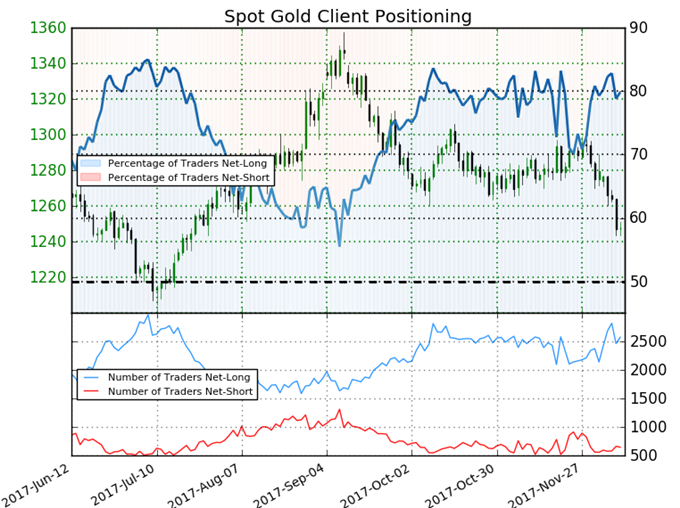 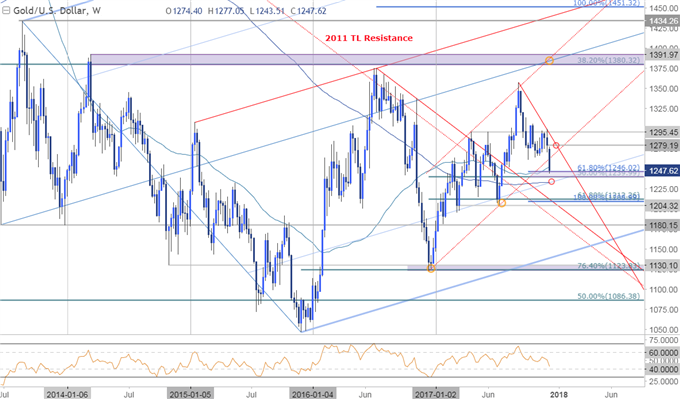 Gold prices have approached a key support confluence highlighted in our 4Q Gold Forecast at 1240/43. This region is defined by the 61.8% extension of the decline off the yearly highs and the 50% retracement of the December advance with the long-term 200-week moving average converging on up-slope support just lower. A break below this threshold would risk a larger set-back in prices with such a scenario eyeing initial weekly support targets at 1204/12. 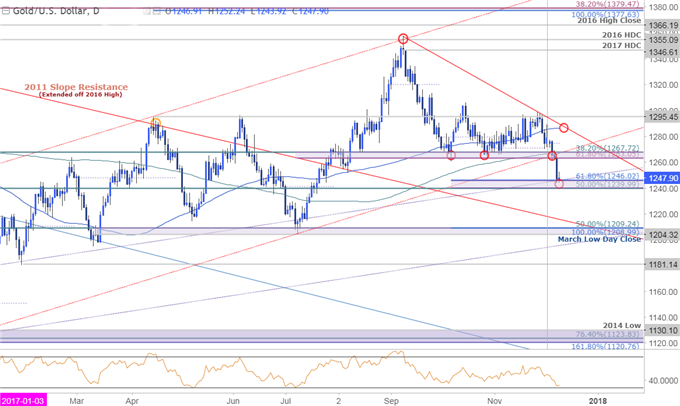 A daily chart highlights the break below a key threshold we’ve been tracking for months at 1263/67 where the 200-day moving average converges on a pair of Fibonacci measurements and the October / November range lows. Look for a reaction off 1240 heading into the FOMC next week 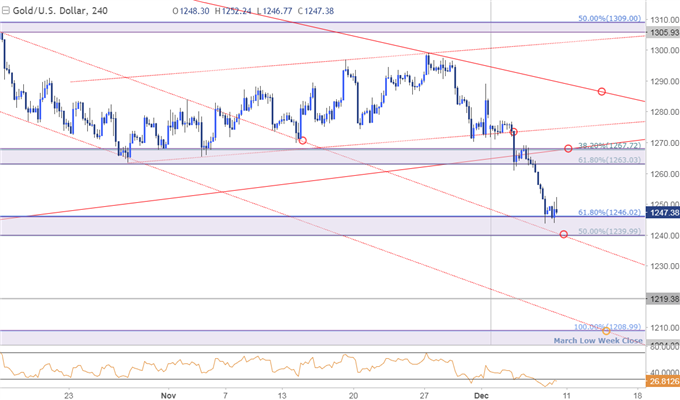 A closer look at near-term price action further highlights this support zone heading into the close of the week. Look for initial resistance at 1267 with a breach above basic trendline resistance extending off the yearly highs / 100-day moving average ~1286 needed to alleviate further downside pressure.

Bottom line: from a trading standpoint I’d be looking for either evidence of an exhaustion low into this support zone OR a breach above yearly trendline resistance before tempting long exposure here heading into the Fed next week. A break /close below this region would leave prices vulnerable for a decline toward 1219 and 1204/08.