Gold's Most Controlled Range in a Decade Faces Dollar, Risk and Bitcoin 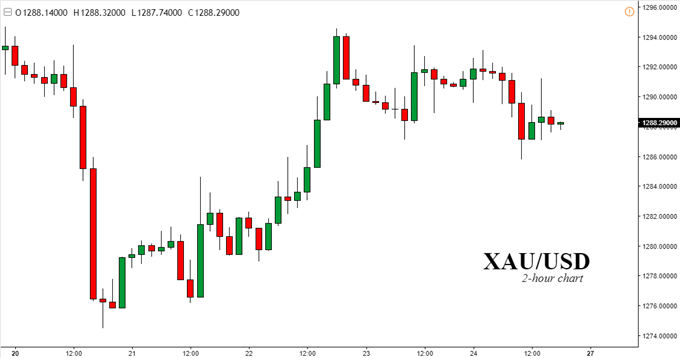 Gold continues to oscillate in a remarkably tight trading range. In fact, with a span of little more than $33 over the last 25 days of trading, we are looking at the most complacent period of trade for the precious metal since 2007. What is truly remarkable about this restraint though is that it comes amid considerable fundamental discussion – the type of which would normally facilitate a charge to the precious metal. A downgrade in global monetary policy forecasts, talk of fading confidence in global financial markets, fears of flare ups among global powers and even a simple drop in the US Dollar have all rendered little from this universal asset.

Monetary policy speculation doesn’t just hold its sway over exchange rates. We have seen extremely accommodative central banks spill over to benefit capital markets as the abundance of cheap capital encourages investment in traditional assets like shares – or you could view it the other way around whereby extremely low yields translates into little meaningful return to be made and need to chase capital gains. Gold also sees a sensitivity through this theme as it is distinctly an asset that does not provide yield. In a world where rates seem to be on the rise, the value of gold – strictly due to price fluctuations – becomes less appealing. That said, this past week, rate expectations continued to slide. The ECB, BoE’s and BoC’s intentions were downgraded over previous weeks, and the FOMC minutes gave evidence to suggest the US central bank could slow its pace through 2018. Perhaps Fed Chair Yellen’s testimony next week and the Fed’s-favored inflation indicator (PCE deflator) will stir a little more life into the discussion.

Another significant talking point that has arisen in the usual circle for Gold is that confidence in the traditional financial system is starting to fade. That would show through in traditional assets like shares and fixed income with benefit shifting to those markets that are not perceived to depend on the sanctity of governments and corporations that are prone to excess and can readily find their correlation surge ‘to one’ in the event of heavy market movement. This talking point seems to be born out of the skepticism that has arisen through the excessive stimulus and maintenance of extremely low interest rates by the world’s largest central banks. Another lightening rod for this conversation is the persistent rise of Bitcoin and certain other cryptocurrencies. There is no denying the lift in digital currencies, but is that reason for their appreciation? If confidence were indeed faltering, we would see assets that are the direct targets (sovereign debt) and ancillary to their buying (shares) respond with at least a moderate slide. Gold would also be sympathetic to such a view as the historic, accessible and regulated alternative asset. I think the lack of relationship is due to the premise of the theme rather than a systemic change in Gold’s nature. Either way, we will see this contrast resolved in the weeks ahead.

What is perhaps the most surprising deviation between metal and theme, however, is the recent break with the Dollar. In a macro sense, gold still plays the role of ‘alternative to traditional currency’ as was clearly on display between 2008 and 2011 when the commodity charged to its record high amid the first wave of unorthodox stimulus programs. We are certainly not in the midst of such a systemic change now as we excised much of those demons. Yet, there remains a very smaller but more intense relationship between the Dollar (the world’s top reserve currency) and gold. Statistical correlations still show a very strong inverse relationship between the two; but that seems to have deviated this past week. As the Greenback has dropped back, gold has notably struggled to take advantage. Even if this were purely a pricing observation (gold is priced traditionally in dollars), the recent slip in correlation is noteworthy. Perhaps there is a consideration of intention at play where the USD is just oscillating due to lack of liquidity. If that is the case, expect its moves next week – when markets fill back up after the holiday – to revive its influence over Gold. In short, expect this precious metal to be shaken out of its dormancy by any number of fundamental cues over the near future. 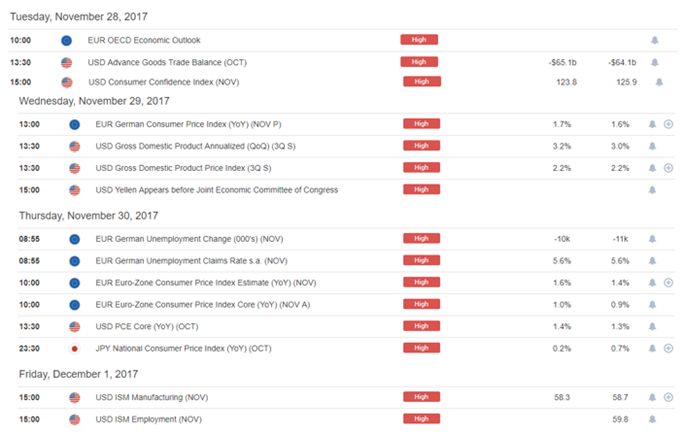