Gold: The Battle Between the Bulls and the Bears Continues 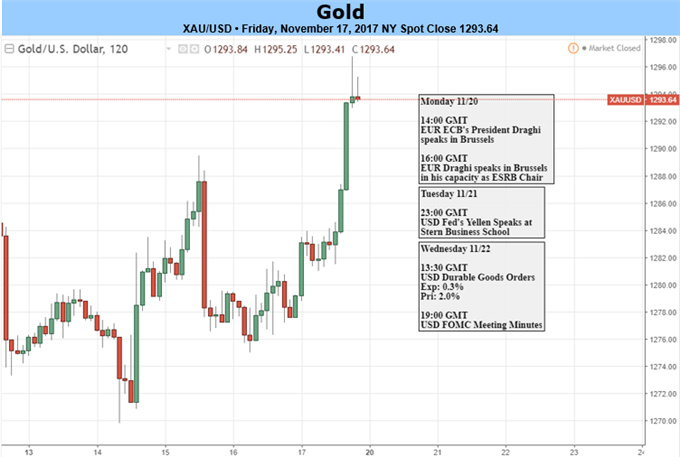 Gold remains stuck in a narrow trading range with neither the bulls nor the bears giving an inch, while both sides press for range break which is likely coming soon. We remain on the sidelines for now, although growing risk aversion has us leaning towards a long position on a break-out.

The argument for a lower price is predicated on higher US interest rates with the target range for the Fed Fund rate likely to be moved up by 0.25% to 1.25%-1.50% at the next Federal Reserve meeting on December 13. A look at short-term US interest rates gives us a slightly clearer picture about the Fed’s interest rate policy with 2-year USTs currently trading just off a nine-year high at 1.72% while 5-year USTs are offered with a yield of 2.055%, a couple of basis points off a six-and-a-half year high. US interest rates are also expected to be hiked another three times next year, adding more downside pressure on gold.

Gold however is starting to regain its safe-haven shine as political upheaval increases and investors become more risk-averse. Venezuela is on the verge of default after missing payments on sovereign debt and bonds issued by the state-owned oil firm PDVSA, while Zimbabwe is gripped by yet another political crisis after President Robert Mugabe was placed under military custody while the army took control of the streets of Harare.

And in a sign that investors are starting to pare back on risk, investors are shunning high-yield bonds. According to the latest data from Bank of America Merrill Lynch, net outflows from high-yield bond funds rose to USD6.7 billion, the third highest outflow on record and a potential pre-cursor to a stock market correction.

The chart below shows the current bull/bear battle with neither side able to break the month-long range with the current price just above mid-range and among the ema cluster, while the stochastics indicator is at a fairly neutral level. 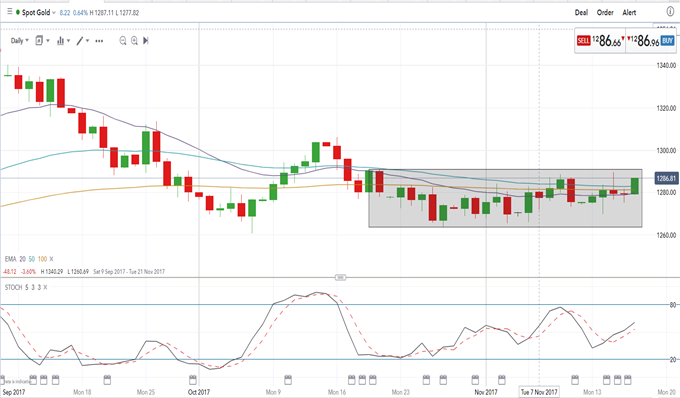 IG Client Sentiment data shows 76.7% of traders are net-long with the ratio of traders long to short at 3.29 to 1. The percentage of traders net-long is now its lowest since Nov 07 when gold traded near $1,277.57. We typically take a contrarian view to crowd sentiment, and the fact traders are net-long suggests gold prices may continue to fall. Yet traders are less net-long than yesterday and compared with last week. Recent changes in sentiment warn that the current gold price trend may soon reverse higher despite the fact traders remain net-long.

And you can check out our latest Q4 trading forecast for Gold here.