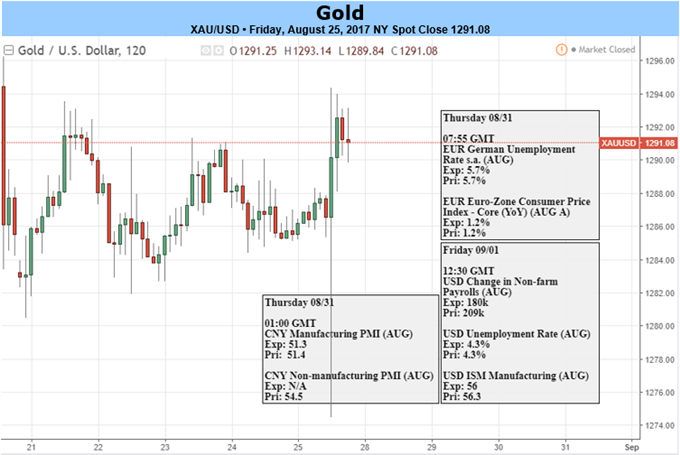 Gold prices are higher this week with the precious metal up 0.48% to trade at 1288 ahead of the New York Close on Friday. Price action this week remained uninspiring until Friday’s Jackson Hole event fueled a brief surge in volatility. The gains come on the back of persistence weakness in the greenback with the DXY trading just above the yearly lows into the close of the week.

Remarks made by Federal Reserve Chair Janet Yellen at the annual Jackson Hole Economic Symposium offered little guidance on the future of monetary policy. Her comments continued to reinforce the notion that the central bank is in no rush to normalize. In fact, Dallas Fed Preside Robert Kaplan went as far as to note that the terminal Fed Funds rate may be closer to / as low as 2.5%. The result saw the dollar come under significant pressure, to the benefit of bullion prices.

Looking ahead to next week, traders will be awaiting the release of the U.S. August Non-Farm Payrolls report with consensus estimates calling for a print of 180k as the headline unemployment rate holds at 4.3%. With the labor markets more-or-less at ‘full’ employment, Fed officials have continued to be plagued by slow inflation – look for the wage inflation figures to drive broader dollar price action on the release. For gold, while the underlying fundamentals remain constructive, prices are approaching the yearly highs and put the immediate advance at risk heading into 1300. 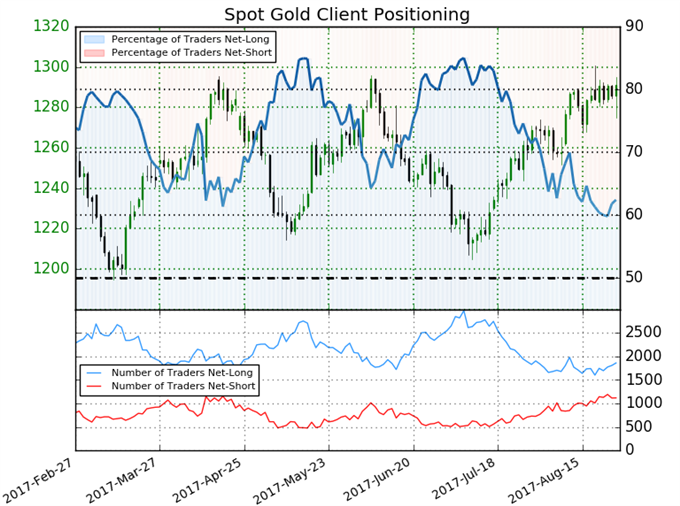 We typically take a contrarian view to crowd sentiment, and the fact traders are net-long suggests Spot Gold prices may continue to fall. Traders are further net-long than yesterday and last week, and the combination of current sentiment and recent changes gives us a stronger Spot Gold-bearish contrarian trading bias. 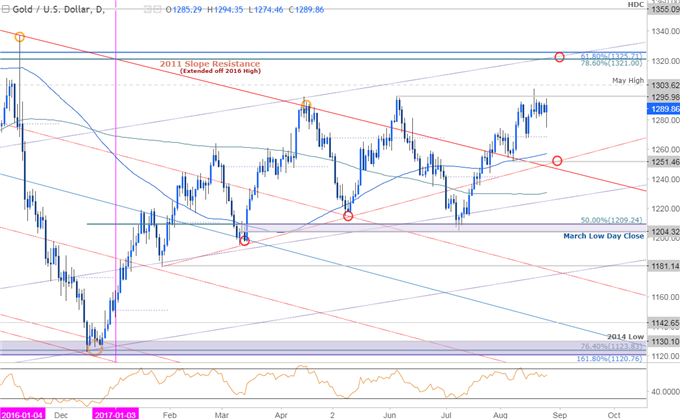 Last week we highlighted that the rally in gold price had failed at, “1300 before pulling back sharply. Price response to this level leaves the immediate risk lower heading into next week, but the broader outlook remains weighted to the topside while above 1251. A topside breach eyes subsequent targets at 1321/25.”

Prices held a tight range into the start of the week with Fed Chair Yellen’s speech on Friday charging a quick drop before turning sharply higher to close the week in the black. 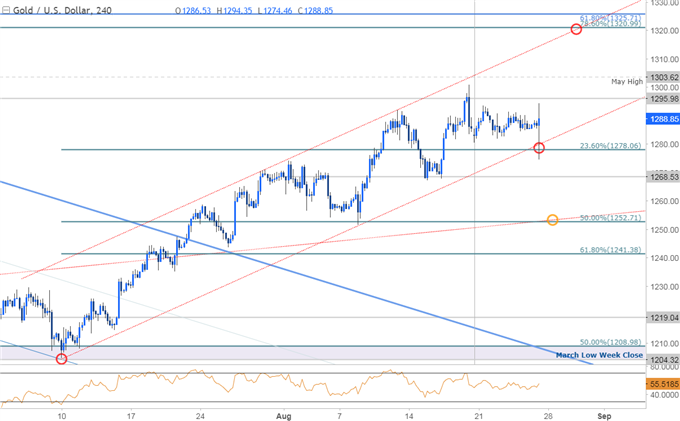 A closer look at price action highlights a well-defined ascending channel formation with the decline on Friday reversing off confluence support at the lower parallel / 23.6% retracement. Heading into next week the focus remains higher while within this formation with bullish invalidation now raised to the monthly open at 1268. Interim resistance stands at 1295 backed closely by 1303- a breach there is needed fuel the next leg higher targeting 1321/25.

Note that gold broke the top of its monthly opening range and as such, I’d be looking for a near-term exhaustion high into the close of August trade. Bottom line: we’ll maintain neutral bias heading into next week while noting a constructive outlook while within this channel.