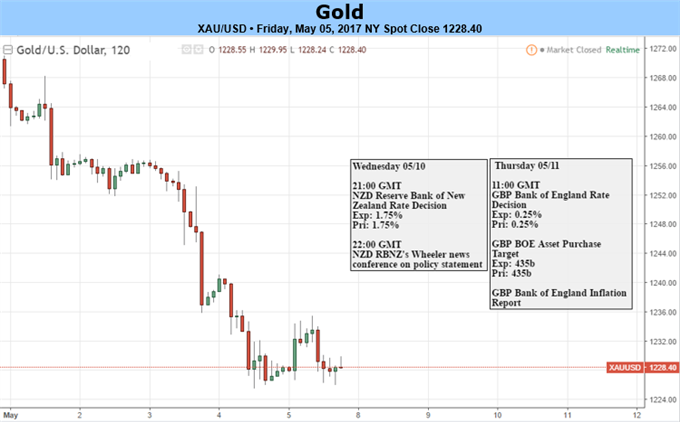 Gold prices fell for the third consecutive week with the precious metal down more than 3.15% to trade at 1227 ahead of the New York close on Friday. The decline marks the largest weekly loss since November, taking prices below technical support, validating a near-term reversal in trend.

We discussed the impact of Friday’s U.S. Non-Farm Payroll report during Friday’s DailyFX Roundtable webinar and while the headline figures did beat, softness in the labor force participation rate is likely to offset any excitement from the central bank as the market continues to approach the Fed’s ‘natural rate’ of unemployment. The result saw a limited impact on gold prices which are poised to close higher on the day.

The FOMC left policy unchanged this week, largely attributing 1Q weakness to ‘transitory’ factors prompting a sell-off gold prices as markets reaffirmed expectations for rate hike next month. Looking ahead to next week’s docket, the markets will be focused on the release of U.S. inflation & retail sales figures for further guidance- keep in mind that as it stands, Fed Fund Futures are currently pricing a nearly 80% chance the central bank will hike in June. Look for strong data to continue to weigh on gold prices as markets still remain behind the Fed’s expectations of 2-3 more hikes this year.

The biggest event risk into the open will be the results of the presidential election in France with independent centrist Emmanuel Macron now widely expected to pull out a victory of over Marine Le Pen. The risk to the current downtrend would be an upset victory for Le Pen- a scenario that would lead to uncertainty regarding the future of the Euro project as a whole (also a scenario that would likely offer some near-term support in gold prices). That said, the current technical picture continues to point lower targeting a more meaningful support confluence heading into next week. 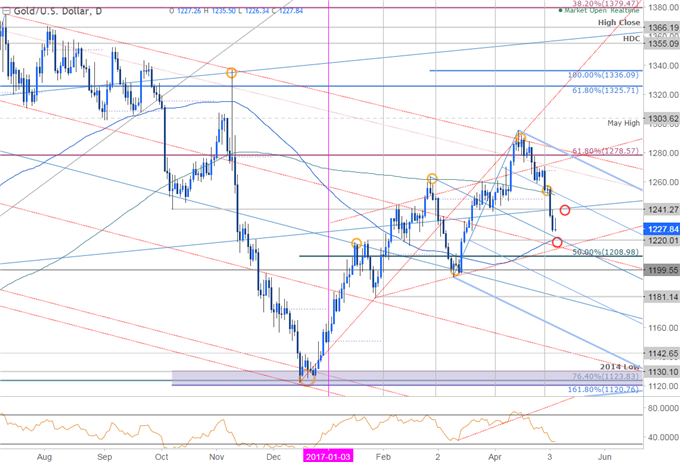 A break below confluence support this week at 1260 validated a near-term reversal in price with the decline taking out targets at 1241 & 1229. A more significant support confluence is seen around 1216/20 where the January high converges on the 100-day moving average and a pair of downslope support parallels. This represents an area of interest for near-term exhaustion / possible long-entries. Initial resistance is now seen back at 1241with bearish invalidation lowered to the 200-day moving average at 1251. Our game play remains unchanged from last week, “Bottom line: heading into the May open we’ll be on the lookout for a move lower into structural support, ultimately to offer more favorable long-entries.”