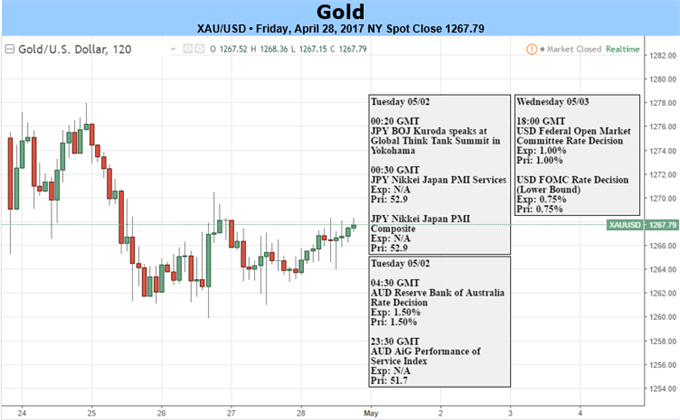 Gold prices fell for the second consecutive week with the precious metal down more than 1.2% to trade at 1267 ahead of the New York closes on Friday. Bullion looks to close the month higher by nearly 1.4% as weakness in the greenback and renewed geo-political tensions fueled demand. The rally failed at key technical levels however and heading into the May open, prices may yet remain on the defensive.

The FOMC rate decision is on tap next week and although the central bank is widely expected to leave policy unchanged, traders will be looking for changes in the statement as Yellen & Co look to prep markets for upcoming adjustments to the benchmark interest rate. Improving labor market metrics (save last month’s off-beat miss) and a 2% read on 1Q Core PCE (Personal Consumption Expenditure) on Friday will continue to put pressure on the Fed to further normalize policy. As it stands, markets are pricing 1-2 additional hikes this year with Fed Fund Futures noting a 67% likelihood of a June hike. That said, for gold the emphasis will remain on the timing and scope of future rate increases. Remember that higher interest rates will tend to weigh on non-yielding assets such as gold.

Highlighting the data docket will be the release of April Non-Farm Payroll figures on Friday with consensus estimates calling for a print of 193K after last month’s disappointing read of just 98K. Unemployment is expected to uptick to 4.6% but we’ll be on the lookout for further improvement in the labor force participation rate to offset this. From a technical standpoint, the start of May trade finds prices continuing to slide after responding to key multi-year technical resistance earlier this month. 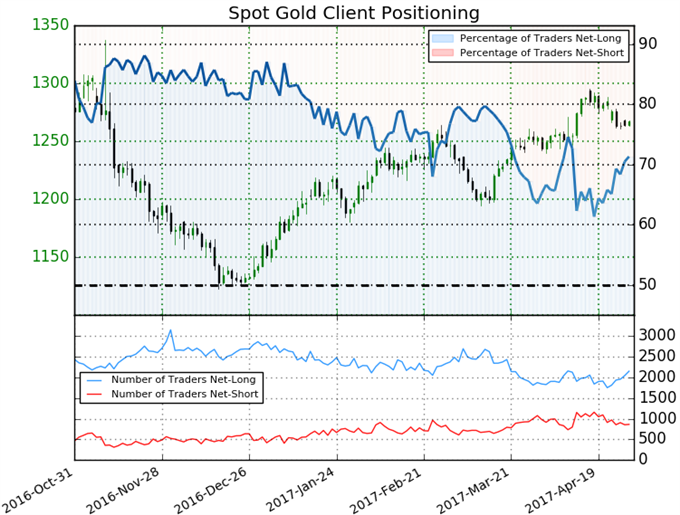 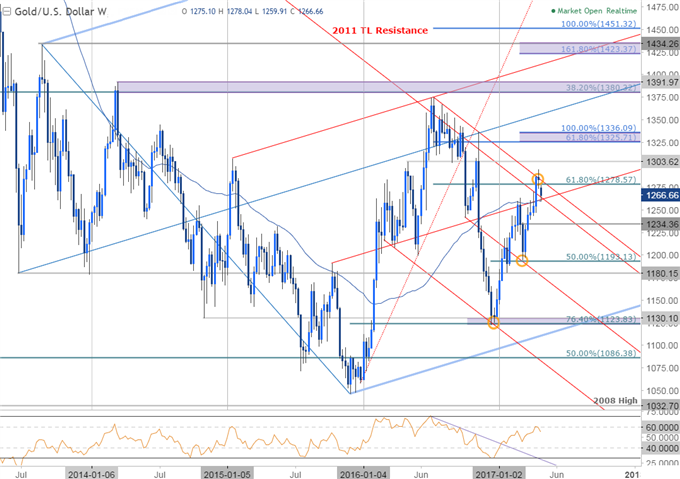 Back on April 13th we cited expectations for “a high in gold over the next few weeks” as prices approached a key long-term resistance confluence region with “initial weekly support at the 52-week moving average, currently ~1255-60”. Indeed gold prices topped on April 17th with the pullback testing initial support this week at 1260- note that this level also converges on the 2011 trendline and if broken on a weekly close basis, would validate a near-term reversal in the prices. Failure of daily RSI to push through the 60-thrshold also warns of near-term waning momentum. 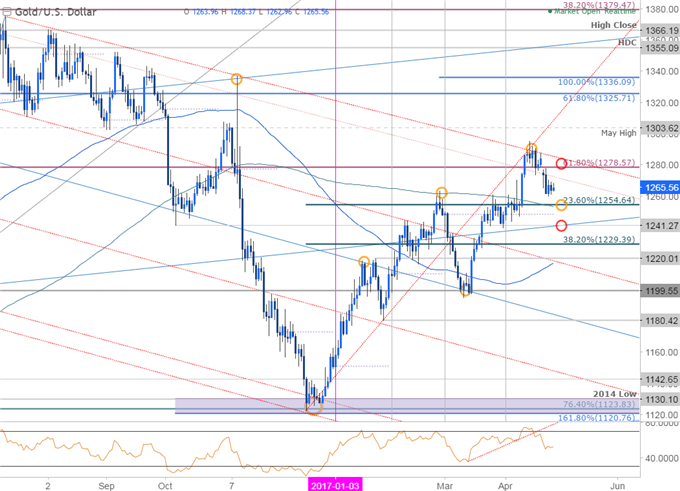 A closer look at the daily chart highlights this near-term pullback with daily support seen at 1255 where a basic 23.6% retracement of the December advance converges on the 200-day moving average. The near-term risk remains weighted to the downside while below 1278 with a break below 1241 shifting the focus towards 1229 & 1220 – both areas of interest for exhaustion / long-entries. Bottom line: heading into the May open we’ll be on the lookout for a move lower into structural support, ultimately to offer more favorable long-entries.