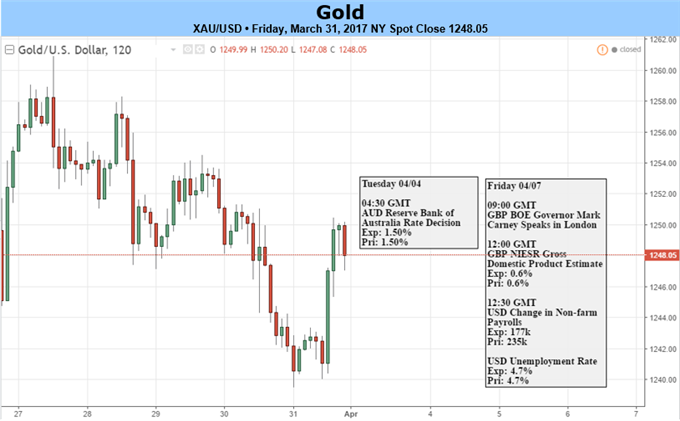 Gold is suffering as a strong US GDP data rekindles Fed rate hike speculation. Last week, gold prices rallied for a second consecutive week with the metal up more than 1.56% to amid continued weakness in the Greenback, owing to increasing hesitancy over the so-called ‘Trump trade’ -- the DXY was down 0.70% in the week, leaving gold virtually unchanged for the month of March. It’s also been a decent three months for gold prices, which are up over 7% on the quarter: that’s more than the gains enjoyed by the Dow and S&P500 over the same period.

But gold prices suffered the largest drop in a month yesterday as the US Dollar rose from its four-month lows alongside Treasury bond yields, sapping demand for anti-fiat and non-interest-bearing assets. The priced-in Fed rate hike outlook firmed, with the year-end level for the target Fed Funds rate implied in futures prices rising by the most in two weeks.

The move followed an unexpectedly large upside revision on fourth-quarter US GDP figures. The US economy grew by 2.1% year-on-year in the fourth quarter of 2016, slightly higher than 2.0% expected by analysts.

The positive economic data likely means the Fed remains on course to raise interest rates at least twice this year, and probably more, providing ongoing support for the Dollar. It also follows hawkish comments regarding the US interest rate policy from several Fed members earlier in the week.

This is all bad news for gold prices, although support has been seen at the $1,240 level. However, political risks may change that narrative next week, as Donald Trump meets his Chinese counterpart President Xi Jin Ping at his Mar-a-Lago retreat in Florida. Trump says this highly anticipated meeting "will be a very difficult one." If it drives risk aversion in the markets, then gold could enjoy some more upside potential.