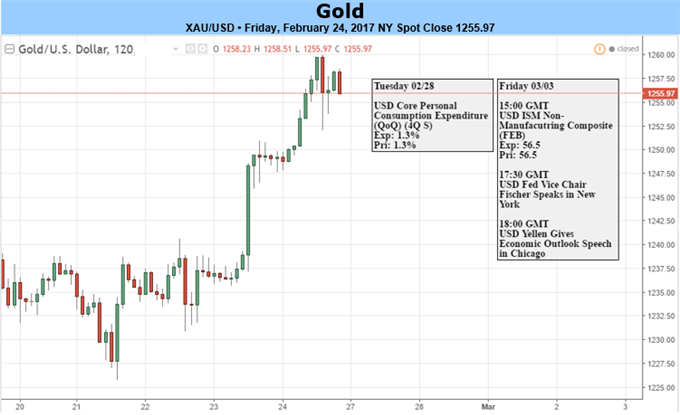 The rally in gold prices continued this week with the precious metal up 1.7% to trade at 1255 ahead of the New York close on Friday. The advance marks the fourth consecutive week of gains and comes on the back of continued softness in the greenback with gold prices now approaching the November pre-U.S. election levels for the first time. While the sheer breath and magnitude of the rally this year continues to point higher, we remain cautious at these levels as prices begin to exhibit signs of near-term exhaustion.

U.S. economic data picks up next week with traders eyeing the release of Durable Goods Orders, the second read on 4Q GDP and the Core Personal Consumption Expenditure (PCE) - the Fed’s preferred gauge on inflation. Keep in mind we have a host of voting FOMC speakers on tap next week with Dallas Fed President Robert Kaplan, Philadelphia Fed President Patrick Harker, Fed Governor Lael Brainard, Fed Governor Jerome Powell, Fed Vice-Chair Stanley Fischer and Chair Janet Yellen slated for commentary. Continued strength in US data may further the argument for a March rate-hike as a growing number of central bank officials favor normalizing monetary policy “sooner rather than later.” That said, a fresh batch of hawkish commentary may curb demand for gold prices which have surged more than 9.4% year-to-date. 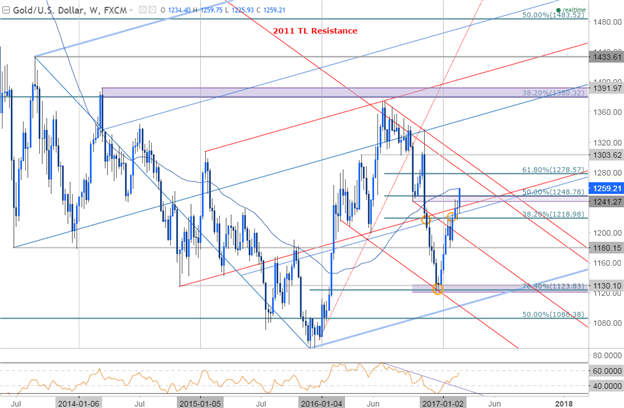 It’s worth noting that heading we’re heading into the close of February with 2017 having seen only one down week for gold prices thus far. This week’s advance broke through the 50% retracement at 1248 before tagging the 52-week moving average. The next critical area of resistance stands at 1278 where the 61.8% retracement of the 2016 decline converges on basic trendline resistance extending off the 2011 high. Structurally, the broader outlook remains constructive while above this week’s low ~1225 – which converges on the 50-line of the operative ascending pitchfork (blue). 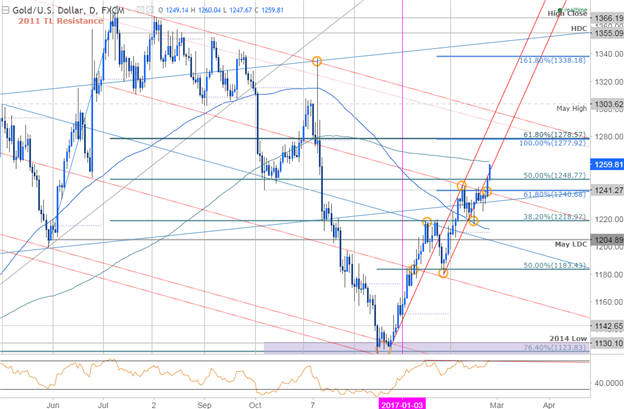 A closer look at the daily chart shows a breach above a nearly month-long consolidation below down-trend slope resistance extending off the July lows. Note that IF we close at these levels, daily RSI will have marked yet another divergence reference point and continues to highlights the near-term risk to the immediate advance. It seems every week gold prices have continued to clear the next resistance hurdle, and while I’m still not ready to get bearish, these considerations continues to leave the trade vulnerable.

Interim support rests at 1248 backed by the weekly low with resistance eyed just higher at the 200-day moving average at 1261 & the 1278 confluence region referenced earlier. From a trading standpoint, I’ll be looking for signs of exhaustion early next week and upcoming support in the DXY could be a tell on whether we’ll see a near-term pullback in bullion prices.