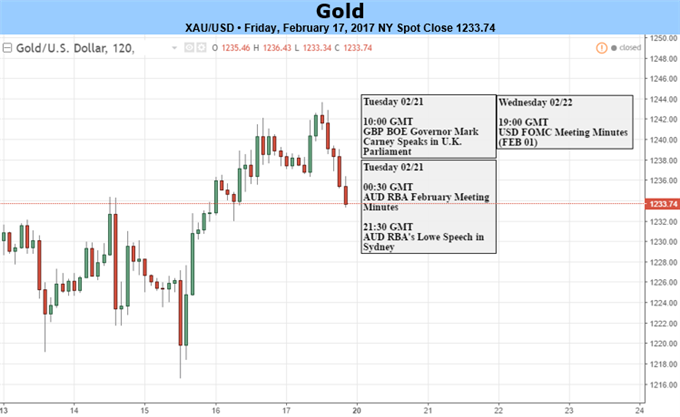 Gold Prices Flirt with 1250 Hurdle Ahead of FOMC Minutes

Gold prices pressed higher for a third consecutive week with the precious metal up 0.39% to trade at 1238 ahead of the New York close on Friday. The gains come on the back of a fresh batch of Fed commentary and while the broader focus remains higher in bullion, prices continue to hold just below key technical resistance.

Highlighting this week’s economic docket was Fed Chair Janet Yellen’s semi-annual Humphrey Hawkins testimony before congress. The remarks casted a slightly more hawkish outlook as Yellen warned of the risks of keeping rates too low for too long and while we’ve heard this commentary before, it’s becoming increasingly more relevant as U.S. economic data continues to heat up. That said, market expectations remains steady for a June rate hike with Fed Fund Futures pricing a 73% chance. Expectations for a hike at the May meeting have climbed to 56% - although it’s important to keep in mind the central bank has never hiked on an off-presser meeting (who knows, it’s the year of the ‘unprecedented’ – maybe they break suit?). For gold, look for a creep higher in interest rate expectations & strength in the greenback to curb demand for the yellow metal. 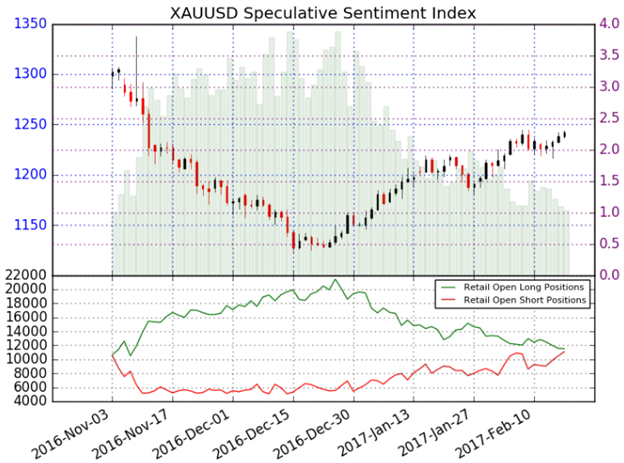 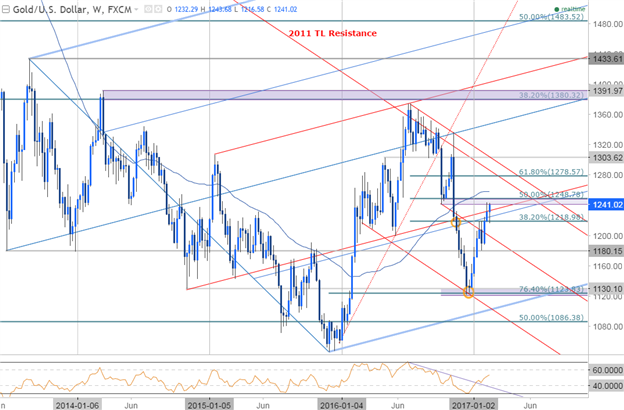 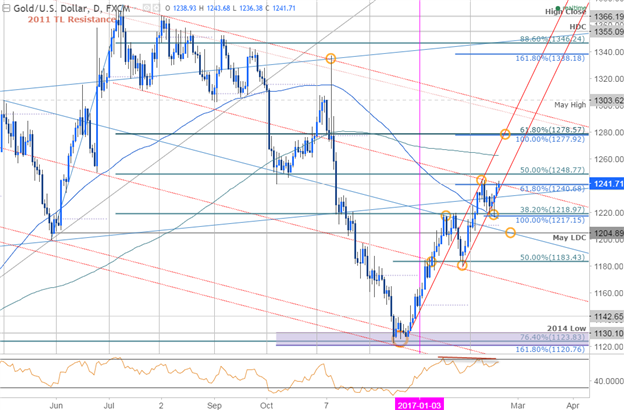 We’ve continued to highlight this key resistance zone at 1241/49 over the past few weeks, “with price turning just ahead of the 1249 target (high was 1245). Note that we’ve continued to mark divergence into these highs and I’m still mindful of trying to chase this any higher from here. There’s only been one down week so far this year as equities have continued to push into record highs- that’s not a reason to get bearish, but certainly highlights the threat to the current uptrend.”

The technical picture remains unchanged heading into next week. The advance is at risk below 1250 with interim support eyed at 1217 backed by the median-line (blue) which converges on the May low-day close at 1205 next week. A break below this threshold would suggest a more significant high is in place – That said, a drop into these levels should be viewed as a long-opportunity. A breach above 1250 targets subsequent topside objectives at 1258/62 (52-week & 200-day moving averages) backed by key resistance at 1277/79 Fibonacci confluence.