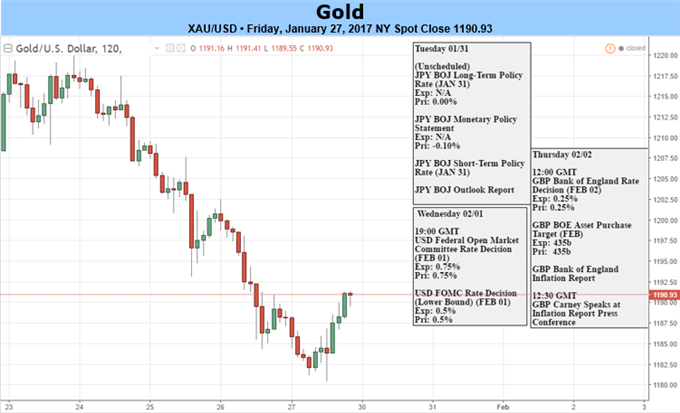 The economic docket is jam packed with the BoJ, FOMC, BoE and U.S. Non-Farm Payrolls (NFPs) highlighting calendar- expect volatility. Keep in mind that the U.S. Dollar has been unable to regain its footing in 2017 with the DXY off more than 3% from its monthly highs. Interestingly enough, the weakness in the greenback was unable to stem losses in gold prices this week and heading into next week the focus will be on whether or not the dollar will be able to stabilize after 3-weeks of consecutive losses. 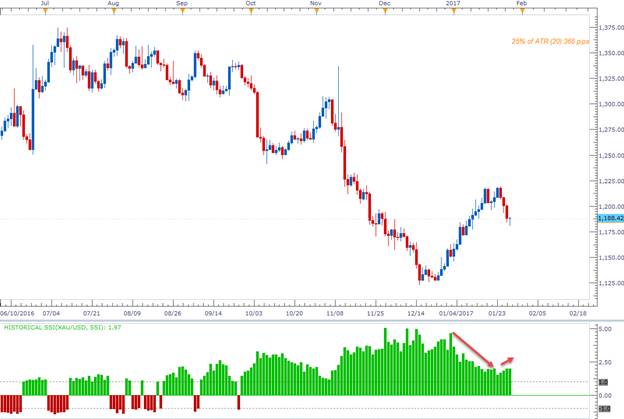 A summary of the DailyFX Speculative Sentiment Index (SSI) shows traders are net long Gold- the ratio stands at +1.97 (67% of traders are long), down from +1.51 last week. Last week we noted that the ratio was, “approaching more neutral levels and highlights the risk of a near-term pullback in price. It’s too early to tell if this will develop into a more significant turn, but for now, the risk is for a correction lower while below resistance.” This week’s pullback has been accompanied by a rebound in long-positioning & leaves the risk weighted to the downside next week. 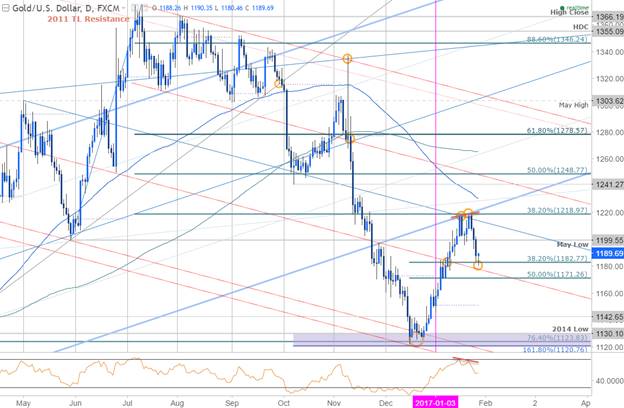 Last week we noted expectations for an exhaustion pullback to, “offer more favorable long entries with a break below interim support at 1200 targeting highlighted confluence slope support at 1182.” So is this the low? Based on the momentum signature, price-action in the DXY (which posted an outside-day reversal off support this week), and the fact that gold is poised to mark an outside weekly reversal candle off resistance, I’d be looking for one more low before mounting a more meaningful recovery. Interim resistance stands at 1200 backed by the median-line extending off the May high (currently ~1211). Broader bearish invalidation remains steady at 1219.

A break below interim support targets the lower parallel which converges on the 50% retracement late next week at 1171. Bottom line: the battle lines are drawn at 1171-1219 heading into the close of January trade & while we may yet see some softening / sideways price-action, weakness into the lower bounds of this range should be viewed as a buying opportunity.

For an a more in-depth discussion on gold and other key setups in play heading into next week, review Friday’s DailyFX Roundtable: BoJ, Fed and BoE Preview.