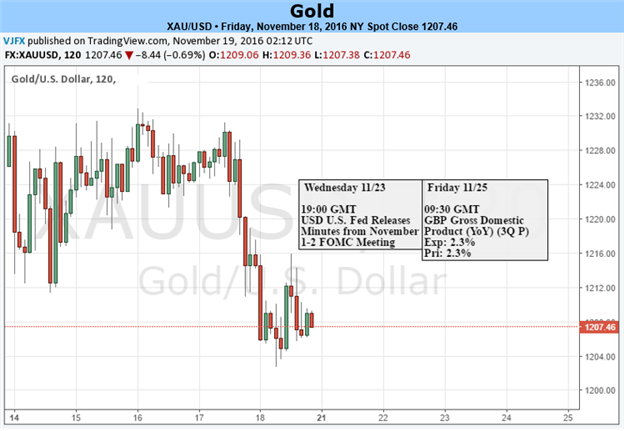 Gold Prices into Support as Trump Rally Ignites the Dollar

Gold prices fell for the second consecutive week with the precious metal down 1.5% to trade at 1209 ahead of the New York close on Friday. The losses come on the back of a massive sell-off last week that took prices to a seven month low. The decline was further exacerbated this week by a surge in the greenback with the DXY rocketing to fresh 13 year highs to mark its largest weekly advance in over a year. Gold prices remain vulnerable as risk appetite continues to pick up post-election and although the broader picture remains bearish, prices are at risk for a near-term recovery as they close the week just above technical support.

Looking ahead to the shortened holiday week, traders will be eyeing the release of the FOMC minutes on Wednesday for further confirmation that the central bank will move to raise rates next month. Fed Fund Futures are now pricing in a 98% likelihood the Fed will hike with the focus now shifting to the pace and scope of subsequent hikes moving into 2017. Expectations for higher rates, a strengthening U.S. Dollar and tumbling bond prices (increase in yields) are likely to curb demand for non-yielding assets like gold. That said, prices are closing the week just above key confluence support which could put a near-term floor on the battered metal. 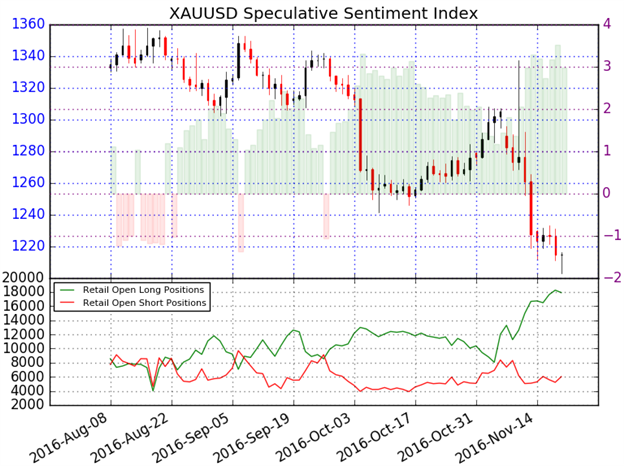 A summary of the DailyFX Speculative Sentiment Index (SSI) shows traders are net long Gold- the ratio stands at +3.02 (75% of traders are long) – bearish reading. Long positions are 16.2% above levels seen last week while short positions rose 9.5% over the same period. Open interest has also seen a remarkable increase, with participation at 28.3% above its monthly average. Despite the ongoing weakness in gold prices, traders remain net-long, while retail sentiment narrows from a fresh 2016-extreme of +3.59 registered earlier this month. That said, the recent pullback in SSI further suggests that the immediate downside bias is at risk. 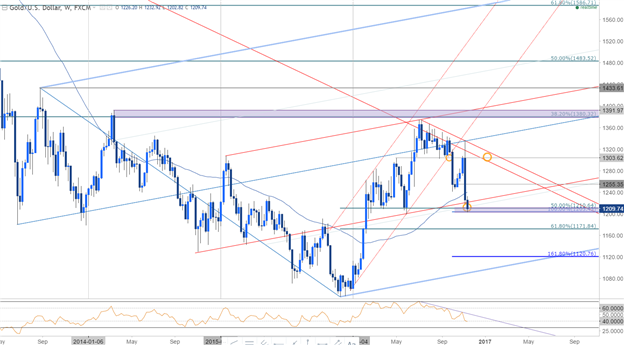 A weekly gold chart highlights a critical Fibonacci support confluence at 1203/10 where the 50% retracement of the advance off the December 2015 low converges on the 100% extension of the decline off the 2016 high (2-equal legs down) and the May low-day close. Note that weekly momentum is also coming into 40-support and suggests that the immediate decline is at risk while above this zone- look for a reaction off this level early next week. 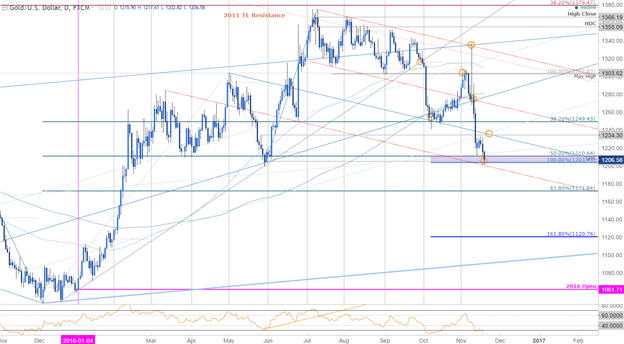 Note that a median-line parallel extending off the March high comes in just below this key support zone and further highlights the aforementioned risk for a near-term rebound. Look for interim resistance at 1234. Broader bearish invalidation remains steady at the monthly open at 1277. A break of this key support barrier targets the 61.8% retracement at 1171 and 1120/23. From a trading standpoint I would be looking to fade strength into structural resistance with a break sub-1203 needed to keep the near-term short-bias alive.