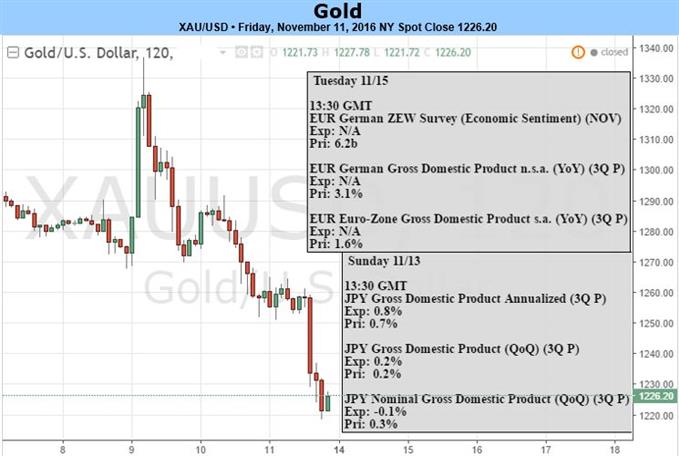 Gold prices plummeted this week with the precious metal down more than 6.2% to trade at 1222 ahead of the New York close on Friday. The losses come on the back of a stunning victory by president-elect Donald Trump with all three major U.S. stock indices closing markedly higher as yields on 10-year Treasuries surged to levels not seen since January. While the broader economic impact of a Trump Presidency remains to be seen, in the near-term market reaction remains constructive with gold prices on the defensive into the close of the week. This ‘risk on’ environment will continue to weigh on the yellow metal as the improvement in market sentiment drives demand for higher yielding assets.

Looking ahead to next week traders will be lending a keen ear to a fresh batch of commentary from Fed Speakers as expectations for a December rate hike continue to take root. Fed Fund Futures have continued to climb post-election with markets now pricing an 84% chance the central bank will move on rates next month. With the stage now set for Janet Yellen & Co, traders will be eyeing key U.S. data prints next week with Advanced Retail Sales & the Consumer Price Index (CPI) on tap. All thing’s held constant (data in-line), look for gold to remain under pressure as rising asset prices & expectations for higher rates continue to curb demand for bullion holdings. 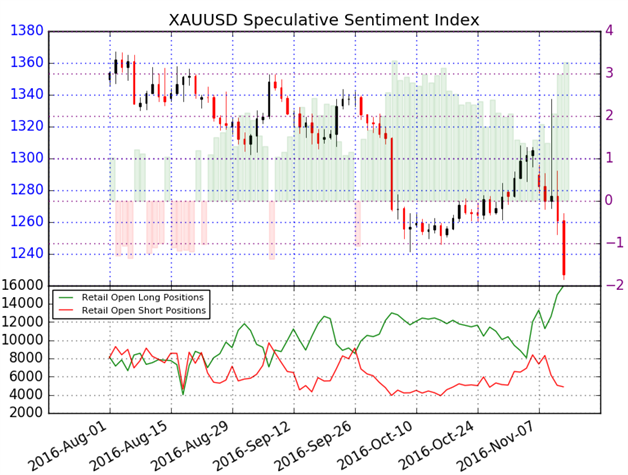 A summary of the DailyFX Speculative Sentiment Index (SSI) shows traders are net long Gold- the ratio stands at +3.51 (78% of traders are long)- weak bearish reading. Last week we noted, “The pullback in long exposure softens the strength of the bearish signal and suggests the recent advance may be at risk heading into next week.” Long positions are now 39.5% above levels seen last week while short positions are 52.8% lower over the same time period. The recent build in open interest (20.7% above its monthly average) on increased long positioning suggests that retail crowds are attempting to fade this downturn and keeps the risk for further near-term losses. 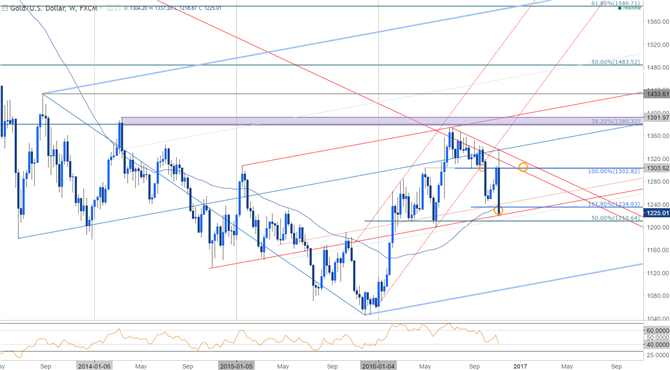 A weekly chart shows gold prices posting an outside-reversal bar off a sliding paralle extending off the early highs – note that this trendline coverges on the mediaan line extending off the June 2013 low and charged a sharp reversal in price with the decline now eyeing confluence structural support into 1210. 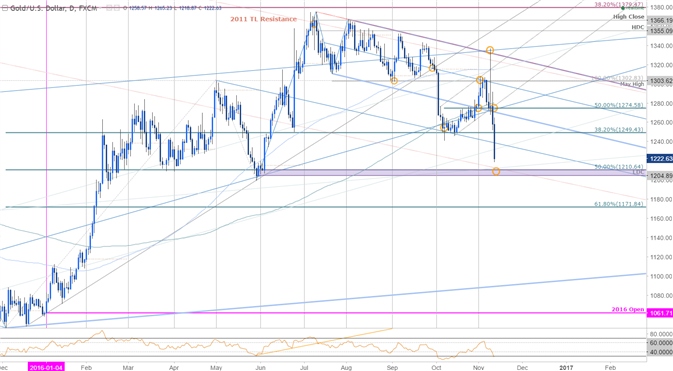 This week marks the largest weekly range since April 2013 and the largest decline since June 2013. Heading into next week, look for near-term support heading into 1205/10- a region defined by the 50% retracement of the December advance and the May low-day close. The short-bias is at risk heading into this zone – area of interest for near-term exhaustion / long-entries with interim resistance seen at 1249 backed by bearish invalidation at 1275. A break lower targets the key 61.8% retracement at 1171. Bottom line, looking for a move lower into support early next week where prices could mount a more meaningful counter-offensive.