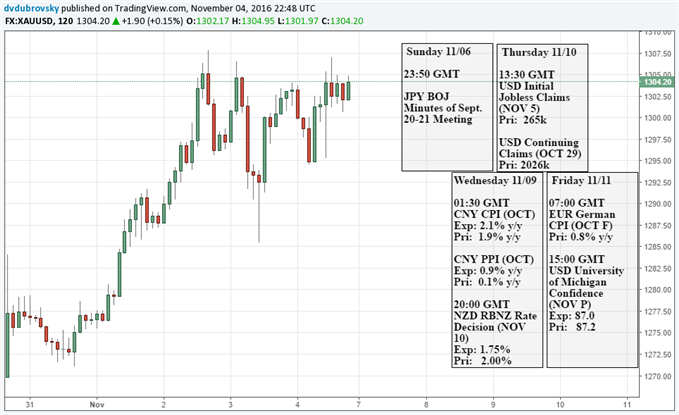 Gold prices are decisively higher this week with the precious metal up more than 2.2% to trade at 1303 ahead of the New York close on Friday. The third consecutive weekly advance comes on the back of a sharp sell-off in the dollar with the DXY down nearly 1.2% to mark the largest weekly decline in the index since mid-August. Global equity markets were also under pressure this week with all three major U.S. Indices down more than 1% ahead of next week’s presidential election.

The Fed left rates unchanged at this week’s FOMC policy meeting with the accompanying statement continuing to highlight expectations for higher borrowing costs in the months ahead. ‘Solid’ job growth accompanied by the unexpected uptick in household earnings strengthens the case for a December rate hike with Fed Fund Futures now pricing the likelihood at 76%.It’s worth noting that Fed officials did continue to warn that ‘market-based measures of inflation compensation have moved up but remain low; most survey-based measures of longer-term inflation expectations are little changed, on balance, in recent months.’ All things held constant, the environment seems set for a move next month.

U.S. October Non-Farm Payroll data released on Friday came in slightly below expectations but was accompanied by a strong upward revision for the previous month. A downtick in the headline unemployment rate to 4.9% was also overshadowed by a drop in the labor force participation rate- overall another ‘goldilocks’ print that continues to reinforce the central bank’s outlook for a slow and gradual interest rate trajectory. For gold prices, even the prospect of higher rates weren’t able to curb demand for the non-yielding asset as traders sought the perceived safety of bullion ahead of what promises to be a momentous week for global markets.

All eyes are on the U.S. Presidential election on Tuesday as markets contemplate the possible impact of a Trump victory. A lookback at previous elections suggests that the broader implications for trend are rather limited, but given the historic nature of this year’s election cycle, the event could have a profound impact on near-term price action. Over the past three cycles, gold prices have closed higher on the week with Election Day typically charging the bulk of the volatility. With that said, the focus remains on the technical picture heading into Tuesday with prices holding just below near-term resistance into the close of the week. 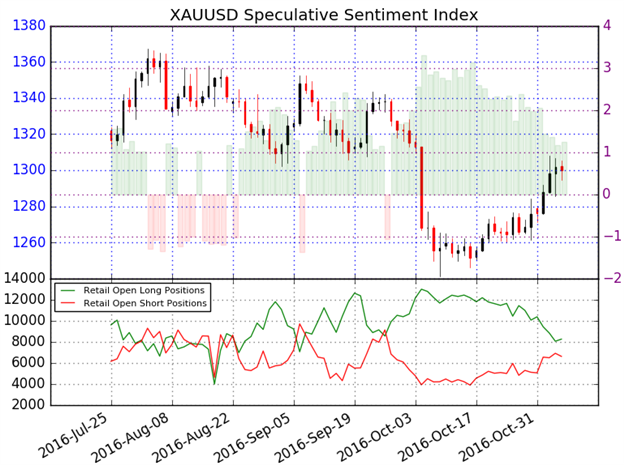 A summary of the DailyFX Speculative Sentiment Index (SSI) shows traders are net long Gold- the ratio stands at +1.25 (56% of traders are long)- weak bearish reading. Long positions are 27.6% below levels seen last week while short positions are 27.2% higher over the same time period. The pullback in long exposure softens the strength of the bearish signal and suggests the recent advance may be at risk heading into next week. 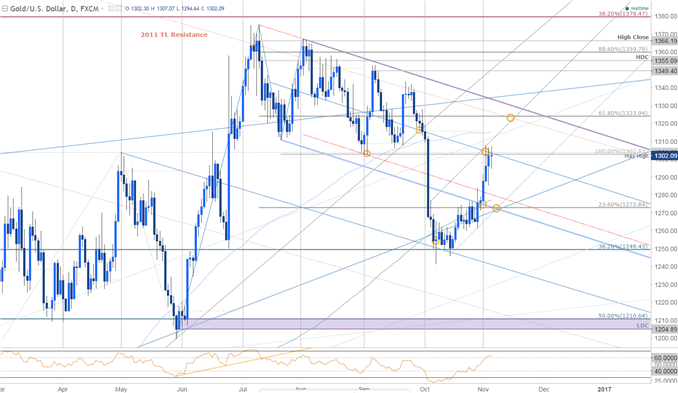 Last week we noted that prices were trading in a tight range just below resistance at the, “200-day moving average as well as a basic 23.6% retracement of the decline off the yearly high at 1273 and will serve as our near-term bearish invalidation level. A breach higher targets 1292 & key resistance at 1303.” Indeed the range did resolve to the topside with the rally struggling just blow the 1303 resistance target into the close of the week.

The immediate advance is at risk while below this threshold near-term with key near-term support / bullish invalidation now eyed at 1272/77- a region defined by basic channel support, the 200-day moving average and the monthly open. A breach higher targets subsequent resistance objectives at the 100-day moving average (~1315) and the 61.8% retracement at 1324- both areas of interest for possible exhaustion / near-term short entries. From a trading standpoint, look for the elections to drive near-term price with the broader focus tilted to the topside while within this near-term ascending channel off the late-October low.