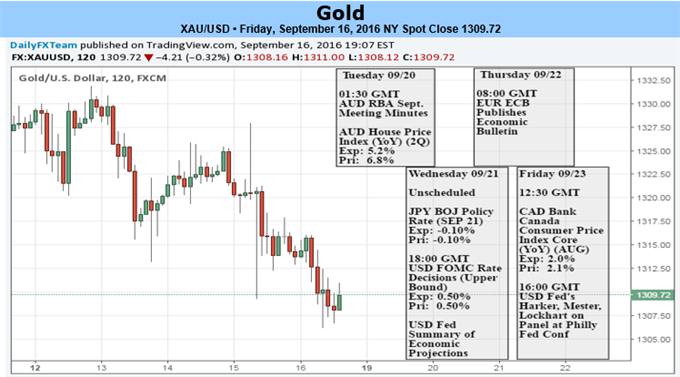 Gold prices are lower this week with the precious metal off 1.46% to trade at 1308 ahead of the New York close on Friday. The losses come as amid a volatile week in US markets with major equity indices whipsawing to close the week slightly higher ahead of next week’s highly anticipated FOMC policy meeting.

U.S. economic data was mixed this week with a miss in retail sales followed by a stronger-than-expected print across the board on Friday’s CPI release. Despite the beat on CPI, the core Personal Consumption Expenditure (PCE), the Fed’s preferred inflationary gauge, remains stubbornly low at just 1.6% and continues to be a concern for central bank officials. The jury is out on whether or not the FOMC will have enough evidence to warrant raising interest rates this year and if inflation & employment continuing to approach the Fed’s respective targets, the case for policy tightening becomes harder to refute.

Looking ahead to next week, all eyes will be fixated on the FOMC interest rate decision on Wednesday. As it stands, markets are expecting the central bank to remain pat on interest rates with Fed Fund Futures pricing in the odds of a rate hike at just 20%. That said, the focus will be on the updated quarterly projections as they pertain to growth, inflation & unemployment. Recent rhetoric from the committee suggests that there is a growing willingness to begin policy tightening and if the vote count shows more dissenters join Kansas City Fed President Esther George in supporting a move to raise rates, look for the greenback to remain supported at the expense of gold. 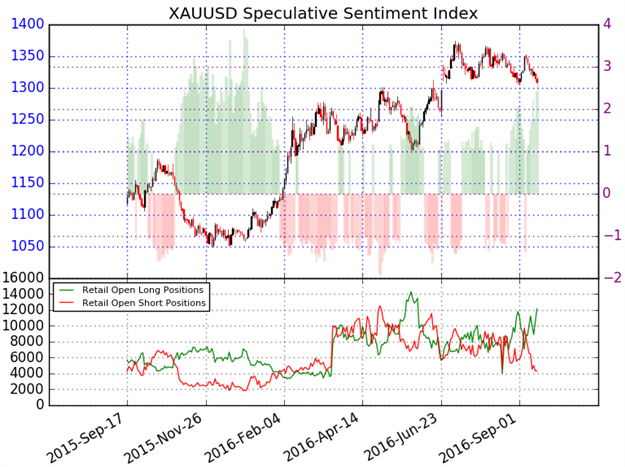 A summary of the DailyFX Speculative Sentiment Index (SSI) shows traders are net long Gold- the ratio stands at 2.29 (75% of traders are long)- bearish reading. Note that long positions are 32.9% above levels seen last week while short positions fell 41.0% over the same period. The increase in long positioning on building open interest keeps the downside bias in focus heading into next week but it’s important to keep in mind that SSI is coming off extremes not seen since January, just before prices bottomed.

Gold is eyeing a key near-term support confluence into the close of the week at 1302/04 where the 100% extension of the decline off the early high converges on the 100-day moving average, the monthly low & the May high. The immediate downside bias is at risk while above this level near-term with initial resistance eyed at the monthly low-day close at 1323 backed by 1330.

A break below this level risks a drop into a confluence support zone at 1287- an area of interest for exhaustion / long-entries. We’ll reserve this level as our broader bullish invalidation zone heading into next week’s FOMC rate decision. From a trading standpoint, I would be looking to fade gold weakness lower down into structural support with a breach above the upper median-line parallel needed to put the broader topside bias back in play targeting 1355 & 1366.