Gold price are marginally firmer this week with the precious metal up 0.43% to trade at 1331 ahead of the New York close on Friday. The advance comes amid weakness in US markets with all three major equity indices off nearly 1% on the week. For gold’s part, the push higher this week keeps prices within a well-defined technical formation and a breach above 1355 is still needed to clear the way for a more significant advance.

Heading into next week traders will be eyeing key U.S. economic data with Retail Sales and the Consumer Price Index (CPI) on tap. Consumer spending is expected to have softened last month with consensus estimates calling for a 0.1% contraction following a flat read in July. Highlighting the docket will be Friday’s CPI print as below-target inflation continues to weigh on the Federal Open Market Committee’s (FOMC) willingness to further normalize monetary policy. Look for bullion prices to remain well supported on a weaker-than-expected print as markets participants weigh the outlook for monetary policy especially as the central bank appears to be following a similar path to 2015.

Recent commentary from Fed officials continues to suggest that the central bank remains on course for a hike this year and heading into next week traders will be looking for more hawkish remarks from Atlanta Fed President Dennis Lockhart, Minneapolis Fed President Neel Kashkari as well as Fed Governor Lael Brainard. As it stands, Fed Funds Futures are highlighting a pickup in interest-rate expectations, with market participants now pricing a 30% probability for a September rate-hike. However, the broader outlook remains unchanged with market consensus continuing to price the first material expectations (above 50%) for a rate-hike in December. For bullion, the pullback from the monthly may be short-lived should the fresh wave of central bank rhetoric fail to move the needle for Fed expectations. 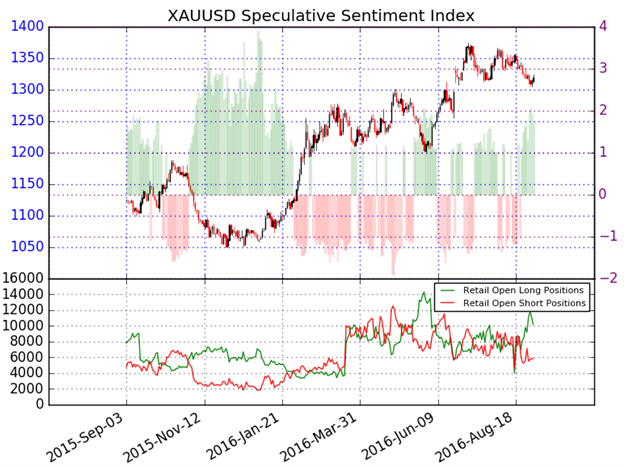 A summary of the DailyFX Speculative Sentiment Index (SSI) shows traders are net long Gold- the ratio stands at 1.34 (57% of traders are long)- bearish reading. Note that short positions are 20.9% above levels seen last week while long positions fell just 5% over the same period. The increase in short positioning on building open interest suggests that a shift in retail sentiment may be underway and leaves the risk for a move higher in price. As we noted last week it’s important to keep in mind that SSI is coming off extremes not seen since May, just before prices bottomed. 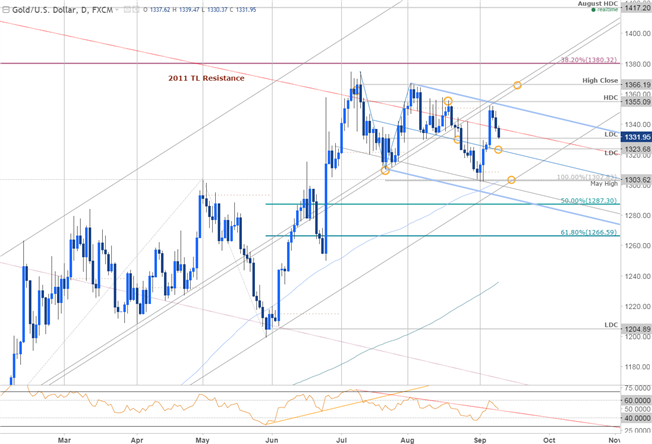 Gold continues to trade within the confines of a modified descending median-line formation with off the yearly high with price turning just ahead of the upper parallel before settling just above the July low-day close at 1330. Subsequent support rests at the monthly low-day close at 1323 & the monthly open at 1308 with the broader focus weighted to the topside for gold while above a key support confluence at 1302- a region defined by the 100% extension of the decline off the highs, the 100 day moving average and basic trendline support extending off the December low.

From a trading standpoint, we’ll be looking for weakness early next week to offer favorable long-entries. Keep in mind that seasonal tendencies favor strength heading into next week. A breach above the upper parallel (blue) would be needed to validate a breakout with such a scenario targeting the 2016 high-day close at 1355 & the yearly close high at 1366- (key resistance).